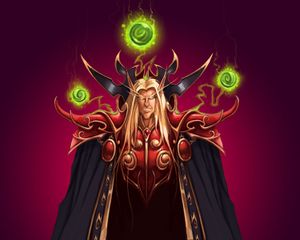 Prince Kael'thas Sunstrider is the son of the late King Anasterian and a direct descendant of the high elves' first king, Dath'Remar Sunstrider. He was born into wealth and privilege.

A wizard of great skill and power, he became a high-ranking member of the Kirin Tor. His continuing magical studies brought him to the Violet Citadel, where he met Lady Jaina Proudmoore while she was still an apprentice. He was immediately drawn to the brilliant and lovely teenager, though the difference between their ages filled him with guilt and self-doubt. Eventually he courted her; however, he had little success in winning her regard. She remained dedicated to her craft above all else.

When rumors began to circulate that Jaina had given her heart to Prince Arthas Menethil, Kael'thas was deeply grieved. In time Jaina and Arthas parted ways, but it was all too obvious to Kael'thas that they still cherished feelings for one another. Kael'thas and Jaina would never have more than an awkward friendship.

Last Scion of the Sunstrider Dynasty

Years later, Arthas became a death knight in the Lich King's service and led the Scourge into Quel'Thalas, leaving a swath of destruction in his wake. He defiled the high elves' fountain of magic, the Sunwell, and left it utterly drained of power. The surviving high elves quickly became sick and apathetic.

King Anasterian was killed in combat against the undead. Only a few pockets of resistance remained to fight the Scourge. Prince Kael'thas was pursuing his magical studies in Dalaran when news of the invasion reached him. With his father dead, the prince hastened home and took command of all the surviving high elves he could find. He realized that his people had become addicted to the Sunwell, which had constantly bathed them in arcane magic for thousands of years.

Hostility of the Alliance

In honor of their fallen kin, Kael'thas decided that he and the other surviving elves would rename themselves the sin'dorei, or blood elves. The blood elves swore they would have vengeance on Arthas and the Scourge. In spite of this bold resolve, Kael'thas and his people suffered greatly in the absence of the Sunwell.

The prince led a group of his healthiest fighters to join the battlefront, where they hoped to fight the Scourge alongside Alliance forces. Yet the blood elves were greeted with suspicion and hostility. When Grand Marshal Garithos ordered Kael'thas and the blood elves to fight local Scourge forces against nearly impossible odds, a group of naga led by Lady Vashj unexpectedly offered assistance that turned the tide of battle. Unfortunately the Alliance soon learned of Kael'thas' association with the naga and condemned him and his people as traitors.

Imprisoned and sentenced to death, the blood elves were rescued by Vashj. She claimed that Illidan Stormrage could help the blood elves with their addiction to arcane magic. By this time the elves were suffering greatly, and Kael'thas felt that he had little choice but to agree. He and his followers followed Vashj to Outland.

There they discovered that Illidan had been captured by Warden Maiev Shadowsong. Vashj and Kael'thas worked together to free Illidan, and then Kael'thas beseeched Illidan for a cure to the blood elves' addiction to magic. Illidan had a different proposal in mind, though: in return for the blood elves' loyalty, he would teach them how to drain arcane magic from other sources, including demons, and thereby feed their painful addiction.

It was an offer Kael'thas felt he had to accept. He was certain his people would die without either a cure or a new source of magic. Kael'thas thus pledged his allegiance to Illidan. Today most of the blood elves in Outland have learned of the pact that Kael'thas made with Illidan. The blood elves still on Azeroth, on the other hand, have little knowledge of the agreement and would probably be appalled to learn of their leader's association with Illidan. Largely unconcerned with what their Azerothian brethren might think, the blood elves currently living in Outland serve Illidan.

Most of Kael'thas' group chose to stay in Outland, but Grand Magister Rommath was sent back to Azeroth with a message of hope for the blood elves still in Quel'Thalas. He relayed tales of a glorious promised land, spread the teachings of Illidan--teachings that Rommath smoothly attributed to Prince Kael'thas--and planted the notion that Kael'thas might one day return to lead his people to paradise. Rommath has since remained in Quel'Thalas to help rebuild and await the prince's return.

Rommath remained in Quel'Thalas to help rebuild and await the prince's return. Thanks to Rommath, the blood elves on Azeroth learned how to drain arcane magic and feed their addiction. As they returned to health, they praised their absent prince and dedicated themselves to learning more. Rommath and the new order of elven magi made great progress in tutoring their brethren to manipulate arcane energies. Soon the spires of Silvermoon City rose skyward once again, powered by volatile magics. The blood elves have even begun retaking portions of Eversong Woods. Emboldened by the promise of Kael'thas' return, the prince's weary people now focus on regaining their strength and forging a new path into an uncertain future.