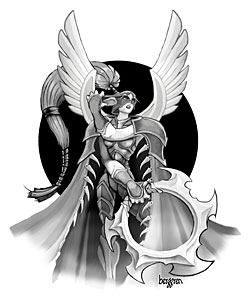 Maiev Shadowsong belonged to the Sisters of Elune by the time the War of the Ancients broke out, and her brother, Jarod, had become a captain in the Guard of Suramar. The Shadowsong family was not of noble blood, and so both siblings had earned their positions through skill and hard work.

The Fortunes of War

Leading the other priestesses into battle, High Priestess Dejahna was mortally wounded, and she named Tyrande Whisperwind as her successor. As one of the senior members of the order, Maiev was bitterly disappointed. Tyrande, who was only a novice at the time, had clearly been gifted with exceptional healing abilities by Elune. However, Tyrande lacked Maiev's experience and, in Maiev's opinion, spent too much time meditating on the goddess' loving and peaceful aspects.

In a time of war, Maiev felt that Tyrande would have made a far better medic than a leader. Nevertheless, Maiev grudgingly acknowledged the new high priestess and followed her orders.

Nor was this to be Maiev's only surprise during the war. Throughout the course of the night elves' fight against the Burning Legion, her brother Jarod was unexpectedly catapulted into prominence. When Lord Kur'talos Ravencrest, commander of the night elf defenders, was assassinated, Jarod soon stepped into the breach and displayed an intuitive grasp of tactics. The relieved nobles swiftly made Jarod their new commander, to Maiev's poorly concealed amazement.

By the end of the war, Jarod had acquitted himself with honor. Even Maiev, who had been highly critical of her brother in the past, could not deny his heroism. She was furious when she discovered that Illidan Stormrage had attacked and injured her brother. Jarod had been leading a scouting party on Mount Hyjal, and they had caught Illidan in the process of creating a second Well of Eternity. Shortly thereafter Malfurion arrived and captured his twin, putting an end to the combat.

Enraged, Maiev drew her weapon and went to kill the captive Illidan, but Tyrande stopped her and reminded her that Jarod still lived. Jarod gave Malfurion the right to decide Illidan's fate, and so it was Malfurion who sentenced Illidan to imprisonment.

Formation of the Watchers

Although she deeply respected Malfurion, his merciful decision hardly satisfied Maiev. She offered to watch over Illidan, whose attack on his fellow night elves had been the last straw. Most night elves now recognized him as both reckless and powerful. They had not forgotten that he had chosen to serve Sargeras, and they did not believe him when he swore he had done so only to gain sufficient power to defeat the Legion.

Malfurion agreed that the night elves dared not leave Illidan unguarded in the long term, and so he asked Maiev to gather additional volunteers from the Sisterhood of Elune. Together, Maiev and the other priestesses would guard Illidan and prevent him from escape. Maiev obeyed and established a new organization that became known as the Watchers. As the group's leader, Maiev was given the rank of warden, which she later awarded to a select few who had proven their exceptional fighting abilities, tracking skills, and tenacity.

When Jarod disappeared one night, Maiev was surprised and grieved that he had not spoken to her of his impending departure. In his absence, the Watchers became Maiev's sole companionship. As the years stretched into centuries and then millennia, she came to see the Watchers as her family.

Since Illidan's incarceration, the Watchers' primary mission remained their vigil over him. However, the Watchers' duties widened somewhat over time and began to include the capture, imprisonment, and--where necessary--the recapture of all dangerous criminals. These new tasks occasionally took a Watcher far abroad, where she would remain until she tracked down and captured the criminal.

Shortly before the Third War broke out, Maiev departed the barrow prisons in order to accomplish one such mission. She returned to find Illidan missing and a number of Watchers slain. Subsequent investigation led to a shocking conclusion: Tyrande and her Sentinels had attacked the Watchers and freed Illidan. Even worse, Illidan had turned into a demon, confirming Maiev's worst fears.

Filled with fury, Maiev gathered what she could of the remaining Watchers and began to track Illidan down. They pursued him through Ashenvale Forest and over the sea to the Broken Isles, then at last caught up with him in the Tomb of Sargeras. By the time they confronted Illidan, however, he had already retrieved a magical artifact: the Eye of Sargeras.

Illidan had not forgotten his long imprisonment. On the contrary, instead of learning from his punishment, Illidan had come to hate Maiev for enforcing his sentence. He used the power of the Eye to collapse that section of the tomb, flooding the area with water and trapping the Watchers. Maiev alone managed to escape, and she swore that she would avenge her murdered sisters. In one fell swoop, Illidan had wiped out almost all of Maiev's sisters in justice. Staggering back into her small base camp, Maiev dispatched a runner to Malfurion, warning him that Illidan was free again and carrying out dangerous magic.

Malfurion and Tyrande immediately hastened to the Broken Isles and helped Maiev fight off Illidan's naga minions, but Illidan managed to escape to Lordaeron. Although Maiev was grateful for the rescue, she blamed Tyrande for Illidan's escape and his slaughter of the Watchers.

While Malfurion went to commune with the land and discover his brother's whereabouts, Maiev and Tyrande continued the search for Illidan and encountered Prince Kael'thas Sunstrider. The prince was leading a large group of his people to safety. Maiev and Tyrande agreed to accompany Kael'thas and guard his people from Scourge attack. In return, the prince and his blood elves said they would help locate Illidan.

Scourge forces ambushed the party at the Arevass River. Arrogantly certain that Elune would protect her, Tyrande stood her ground on the bridge and cast a destructive spell on the undead while the blood elves retreated. Then the bridge gave way, and Tyrande was swept into the river and out of sight.

With Illidan still on the loose, Maiev refused to spend precious time tracking down the high priestess. Instead, with the blood elves' help, Maiev continued her search for Illidan. Eventually she and the blood elves met up with Malfurion.

The Means to an End

Malfurion's love for Tyrande was well known and had lasted for thousands of years. Despite his wisdom, in which Maiev had no doubt, she knew that telling Malfurion the truth would lead to a further waste of time. He would opt to try rescuing his treacherous mate, who might already be dead, rather than pursue Illidan, who was clearly a terrible threat to the entire world.

Accordingly, Maiev told Malfurion that Tyrande had been killed by the Scourge. She blamed Illidan for Tyrande's death. To Maiev's relief, the prospect of revenge sufficed to motivate the grieving Malfurion, just as it kept Maiev herself going. Illidan would pay for all the deaths he had caused.

Not too much later, Maiev, Malfurion, and the blood elves managed to corner Illidan. Illidan and the naga were channeling a spell through the Eye of Sargeras, a spell whose raw power threatened to tear the planet apart. When the spell was interrupted, Illidan began his usual protests of innocence and self-justification, but Maiev would hear none of it. She sentenced him to death on the spot and went to carry out the sentence.

Unfortunately the truth about Tyrande's fate came to light just then, and Illidan was damnably quick to offer his assistance in rescuing Tyrande. Unable to refuse the help he might get from the naga and their evil master, Malfurion turned all his fear and rage on Maiev instead of Illidan. He called roots out of the ground to hold her fast while he and Illidan departed to seek out Tyrande.

Freeing herself from the grasping plants and gathering her few remaining soldiers took Maiev long enough that Illidan succeeded in saving the high priestess. By the time Maiev caught up with the demon, Malfurion and Tyrande were bidding him a farewell that sounded almost fond.

They were letting him go.

He was a demon who had murdered countless innocents, spread corruption and madness among the beasts of the forest, and nearly caused irreparable harm to Azeroth. Jarod had given Malfurion the responsibility to determine Illidan's fate, but Malfurion was letting the demon go because Illidan had saved Tyrande's life.

Evidently Malfurion felt that Illidan had been washed clean of the all the blood he had spilled. Maiev disagreed. The Watchers were gone, betrayed by their own government. If that government would not at least avenge their deaths, then by Elune, Maiev would see it done herself.

Thus, when Illidan suddenly opened a portal and stepped through it, Maiev and her soldiers followed him without a second thought. She knew that Illidan placed great value on his life and would never deliberately endanger it.

No Mercy, No Surrender

Emerging from the portal, Maiev and her soldiers found themselves on the shattered planet of Outland. They soon discovered that Illidan had come alone, leaving his naga servants on Azeroth. Greatly outnumbered, Illidan discovered that his evil powers were of little use against cold steel, and his recapture proved to be fairly easy.

Too easy. Maiev was bringing the caged demon back to her base when she was attacked. The naga had arrived on Outland, and they had brought new allies: the same blood elves that Maiev had helped escape the Scourge earlier. Maiev and her soldiers fought the naga and their traitorous elven friends, but the new army outnumbered hers, and eventually she was defeated. The naga and blood elves recaptured Illidan and freed him.

Illidan and his allies have had little or no communication with the living denizens of Azeroth since that time. His brief return to Azeroth and his defeat by Arthas Menethil are, of course, public knowledge, but Maiev's ultimate fate has remained a matter of conjecture. Neither she nor any of her followers have been sighted on Azeroth since they followed Illidan to Outland. Given her unrelenting hate for Illidan, his continued good health is obviously a very bad sign. She is presumed dead, slain during her pursuit of vengeance.