Also known as: the White Stag, the Waywatcher, Apa'ro (term specific to tauren) 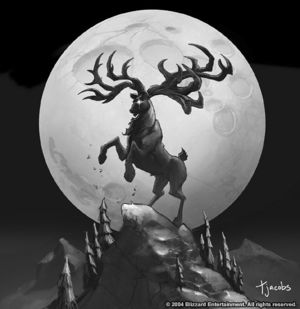 Malorne was a forest demigod who always took the form of a huge white stag, despite the powerful nature magic he wielded. He and the moon goddess Elune were the parents of the demigod Cenarius. The tauren have a myth that purportedly relates the story of Cenarius' conception.

Because Ysera the Dreamer agreed to act as Cenarius' foster mother, she has often been mistaken for the demigod's true mother. As a result, there are also rumors that she and Malorne had a romantic relationship. However, such rumors are baseless, though Ysera had a deep affection and respect for the demigod. He was one of nature's mightiest champions and a frequent visitor to the Emerald Dream.

Powers of the Wild

Indeed, Malorne possessed a strong link to the Dream that was similar to that of a green dragon. He, too, had dreamsight, and so simultaneously perceived both the Dream and the current state of Azeroth.

Malorne also possessed healing powers, along with a calming aura that sometimes stopped battles before they began. Furthermore, he was one of the first living beings in the world. By the time of his death, he had become one of Azeroth's most beloved and powerful demigods, and he was renowned for his wisdom.

Rumor has it that a group known as the Druids of the Antler once existed: a collection of people who sought to emulate Malorne and recreate his powers on Azeroth. If druids as a whole are wary of detection, though, this small subgroup, if it exists, has proven even more elusive. No solid evidence of these particular druids has ever been found.

Yet memory is fickle, even for the night elves, some of whom witnessed Malorne's heroic death. In the ensuing millennia, most of Azeroth's denizens have forgotten Malorne. Almost all of those who do remember the tale are druids.

During the War of the Ancients, Cenarius appealed to Malorne and the other demigods of Azeroth to join the battle against the Burning Legion. After much debate, Cenarius persuaded them to unite under the command of Captain Jarod Shadowsong, who was leading a large army of night elves and other creatures against the Legion. When Cenarius was badly wounded in battle, Malorne charged at the attacking demons and held them back while the night elves dragged his unconscious son to safety.

Irritated at losing his chosen prey, Archimonde emerged from the demonic host and challenged Malorne to single combat. The other demons cheered Archimonde on, and the White Stag stubbornly fought with all his might. Even so, ultimately Archimonde snapped the heroic demigod's neck.