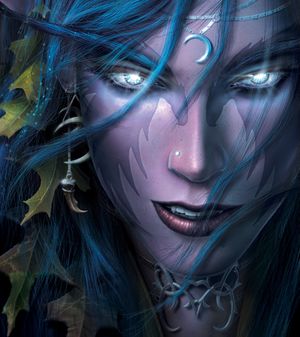 Ten thousand years before the First War, the world of Azeroth cradled only one massive continent: Kalimdor. At the dark continent's center was a mysterious lake of incandescent energies. This lake came to be known as the Well of Eternity.

Development of the Kaldorei

In time, a primitive tribe of nocturnal humanoids were drawn by the Well's strange energies and built crude homes upon its tranquil shores. Over time, the Well's cosmic power affected the tribe, making them strong, wise, and immortal. Their skin turned various shades of violet, and they grew taller in stature. The tribe adopted the name kaldorei, which meant "children of the stars" in their native tongue.

The kaldorei, or night elves as they would later be known, worshipped Elune, goddess of the moon, and believed that she slept within the Well's shimmering depths during the daylight hours. The early night elf priests and seers studied the Well with great curiosity, and the ongoing research of the Well became a facet of night elf society.

The Well of Eternity also caused the night elves' eyes to glow with a silver or golden radiance. Their vision became preternaturally sensitive to light and motion. Contrary to what a casual observer might believe, night elf eyes still have pupils, just as the eyes of many other humanoid races do. These pupils can be difficult to discern, particularly under certain lighting or from certain angles.

More importantly, the night elves learned the art of spellcasting, using the energies of the Well of Eternity. The night elves' magic quickly allowed them to establish a strong empire. As the night elves claimed further territory, they came into conflict with the trolls in the area, who had long dominated much of ancient Kalimdor. Unable to master arcane magic quickly enough to counter the night elves' sudden and fierce attacks, the trolls were forced to retreat. Thus was born the long-standing feud between night elves and trolls, an enmity which persists to this day.

Are night elves descended from trolls? The night elf race was formed so long ago that no hard evidence has surfaced to answer this question, although it has been asked many times. All that is known for certain is that a tribe of nocturnal humanoids came to live on the shores of the first Well of Eternity, and the Well's cosmic energies changed them into the night elves we know today.

Certainly many trolls do believe that the humanoids who developed into the night elf race were trolls. The theory does have some credibility, for there is at least a superficial physical resemblance between trolls and night elves. Furthermore, the troll race dominated much of ancient Kalimdor several millennia before the night elves came into power.

Nevertheless, many night elves find this theory preposterous and abhorrent. They are quick to point out that the first night elves began their rise to power by defeating a number of nearby troll tribes. As a consequence, the trolls came to fear and respect the might of their new rivals. The troll theory of night elf ancestry may have been a direct result of this early conflict. The trolls hated the night elves--a sentiment that persists to this day--and may have wished to marginalize the night elf race and its accomplishments. Also, attributing the night elf race with a troll heritage likely helped the trolls come to terms with their own shocking defeat.

Without additional data, there is little point in debating the merits of this controversial theory. No doubt it will remain a matter of contention for years to come.

Arcane Magic and Its Consequences

The night elves studied the energies of the Well for over a thousand years before Queen Azshara came to the throne. By that time, one caste of night elf nobility had risen to prominence. Under Azshara's reign, members of that caste began calling themselves the Highborne. The name pleased Azshara, for she too was a member of the highest caste, and she approved the term for official use.

Many Highborne were obsessed with the Well, and with Azshara's approval, they devoted themselves to studying it day and night. Their reckless use of arcane magic eventually caught the attention of Sargeras, who easily corrupted the arrogant Highborne. Captivated by the dark titan, the Highborne helped the Burning Legion invade Azeroth. Countless night elves and other creatures died during the resulting War of the Ancients. In the end, the remaining night elves managed to defeat the Legion with the help of many allies and several heroes, including High Priestess Tyrande Whisperwind, Malfurion Stormrage, and Illidan Stormrage.

Some of the Highborne regretted their choice to aid the Legion and managed to escape the capital city, Zin-Azshari, before the Well of Eternity imploded and triggered the Great Sundering. Afterwards, arcane magic was outlawed on pain of death, but the Highborne arrogantly continued their dangerous sorcery. Rather than execute their defiant kindred, Tyrande and Malfurion sentenced the Highborne to exile. The exiles journeyed over the sea to Lordaeron, where they founded the kingdom of Quel'Thalas and began calling themselves high elves.

Most of the remaining night elves had had enough of aristocracy and arcane magic. Such things were seen as relics of a decadent and shameful past. Even so, Illidan created a second Well of Eternity, for he did not believe that arcane magic was inherently dangerous. Most of the other night elves disagreed, however, and so Illidan was imprisoned. Three of the Dragon Aspects grew the first World Tree, Nordrassil, atop the Well so that the tree, which was linked to the Emerald Dream, would act as a regulator on the Well's magics. Nordrassil also bestowed a number of gifts upon the night elves, including continued immortality.

Tyrande led the drive to reorganize night elf government. She believed that her order, the Sisterhood of Elune, had been too distant from the day-to-day affairs of their people. In her opinion, this distance had been partly to blame for the catastrophic war.

The Sisterhood was greatly revered for its combat and healing skills, and its members had trained as warriors and scholars for generations. Furthermore, the Sisterhood was one of the few sizeable night elf groups to survive the war. Better yet, membership and rank among the Sisterhood had never been based upon family bloodlines.

Inevitably Tyrande decided that her order should take on greater societal responsibilities. Never again would the Sisters of Elune fail in their duty to guide their people. Disbanding the former night elf army, most of which had been based on lineage rather than ability, Tyrande organized a new army called the Sentinels. This army is still directed by the Sisters of Elune, and thus Tyrande has been sole head of the night elf government throughout the ensuing millennia.

Meanwhile, Tyrande's mate, Malfurion, taught the druidic arts to other night elves. This small group of druids dedicated themselves to preserving the balance of nature on Azeroth. Highly respected by the rest of night elf society, the druids are nevertheless outside of it, for they answer to no government. Today the Cenarion Circle welcomes members from a variety of different races, but the organization has no governmental authority over any of these races.

Ashamed of the catastrophe their people had brought to Azeroth, the night elves withdrew to their forests and remained isolated there for approximately ten thousand years. Then their solitude was shattered by the arrival of Warchief Thrall and the Horde, along with a large group of human refugees, led by Lady Jaina Proudmoore. Tyrande was infuriated by the intruders, who trespassed upon lands that had belonged to the night elves alone for millennia. The Horde in particular not only chopped down vast stretches of forest, but also slew the demigod Cenarius.

Tyrande led the Sentinels into battle against the mortal invaders, only to discover that the Burning Legion had followed the invaders to Kalimdor. The Legion had launched a new invasion upon the world. The high priestess and her soldiers raced to waken all the druids slumbering in the Emerald Dream, including Malfurion.

With some encouragement from Medivh, the night elves saw the wisdom of uniting their forces with the humans and orcs. The three armies fought the demon lord Archimonde and his minions as they advanced on the summit of Mount Hyjal and the Well of Eternity that Archimonde sought to plunder. Together the armies delayed the Legion until the night elves had empowered Nordrassil with the magic of their immortality and the energies of countless night elf spirits. Then the World Tree gave off a massive burst of energy that killed Archimonde instantly.

Without their commander, the Burning Legion crumbled and was defeated. Nordrassil and the second Well of Eternity still stand. The night elves' noble sacrifice has cost them their immortality. Under the leadership of Archdruid Fandral Staghelm, the Cenarion Circle has grown a second World Tree, Teldrassil, in the hopes of restoring what the night elves have lost. Thus far, those hopes have proven fruitless. Currently the night elves are members of the Alliance.

Before the Sundering, golden eyes were extremely rare among the night elves. Golden eyes thus came to be regarded as a sign of future greatness. Both Queen Azshara and Illidan had these unusual eyes. Unfortunately the falsehood of this widespread belief was only to become clear after these two infamous individuals had reached their dark fates.

In truth, golden eyes were a sign of strong druidic potential. Little wonder that pre-Sundering night elves, with their emphasis on the arcane, did not understand the significance of these unusual eyes. Simply having this potential did not guarantee that the potential would be sensed or understood, much less wielded with skill and compassion. Despite his golden eyes, Illidan struggled with the druidic arts, though he, like Malfurion, was tutored by Cenarius.

Innate druidic power does not necessarily lead to becoming a druid, and lacking that innate power does not preclude becoming a druid. Indeed, Malfurion was born with eyes that glowed silver, but he studied druidism, and his wholehearted dedication gave him a power and skill far beyond most druids. As he continued to use druidic magic, his eyes acquired the golden incandescence that had once been so coveted by other night elves.

Traditionally night elf women served their people as warriors, hunters, and protectors. Many spellcasting vocations, on the other hand, were generally considered the realm of night elf men. Only since the devastating casualties of the Third War have these conventional gender roles been set aside. Because druids only recently opened their ranks to women, golden eyes remain somewhat more prevalent among night elf men than their female counterparts.

Both blood elves and high elves are descended from night elves. Nevertheless, due to their shared history and philosophical differences, the three groups do not share a close relationship. Indeed, night elves regard high elves and blood elves with suspicion, disgust, or outright hostility.

Nevertheless, night elves do share some characteristics with their high elf and blood elf brethren. All three groups have unusually acute senses and are able to see clearly even in low-light conditions. As a general rule, elves are also slim, athletic, and graceful. Furthermore, they all have large pointed ears that tend to be greeted with admiration or mockery by other races.

One similarity between night elves, high elves, and blood elves has only recently come about. The night elves sacrificed their immortality and much of their power at the end of the Third War. Thus, all elves are now mortal and have comparable lifespans that can extend as long as several thousand years.

The information could still retrieved from http://www.wow-europe.com/en/info/encyclopedia/508.xml.