The Sentinels are the army of the night elf nation. 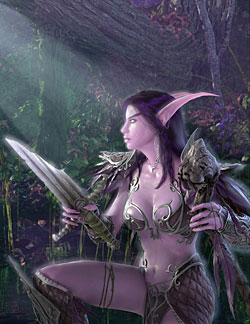 The Sentinels were established shortly after the War of the Ancients, and until recently all of its soldiers were night elf women. However, the Third War resulted in so many casualties that the traditional gender roles of night elf society have been set aside in favor of more practical concerns. As a result, although the Sentinels are still primarily women, there are now also men among their ranks.

By the time of the Great Sundering, military service for the night elves had become more a matter of bloodline than ability. Almost all high-ranking officers were nobles, and the night elves had lived in peace for so long that very few of those officers, however privileged and well educated, possessed even a basic knowledge of tactics. Joining the army, once a selfless choice to defend the night elf people, had been reduced to a status symbol.

The War of the Ancients made the army's deterioration all too clear. After the night elves and their allies had achieved victory, High Priestess Tyrande Whisperwind decreed sweeping changes throughout night elf society. As part of these changes, Tyrande disbanded the old army, most of which had no desire for further battle, and established the Sentinels.

The Sisterhood of Elune was one of the few major organizations to survive the war largely intact, and membership in its ranks had never been a matter of bloodline. Furthermore, members of the order had trained extensively in combat, tactics, and healing. Yet in spite of all their knowledge and experience, the priestesses had become somewhat distant from the rest of night elf society.

Tyrande believed that this distance was partly to blame for the cataclysmic war, and she resolved that her order would take up the duty of directing the Sentinels. Never again would the Sisters of Elune fail to guide the night elf people. To this day Shandris still reports to Tyrande, who is both the high priestess of Elune and sole ruler of night elf government.

The Sentinels are courageous and selfless soldiers whose only goal for the last ten millennia has been to defend the night elf people. New recruits undergo extensive training, and as time permits, the more experienced warriors undergo frequent combat drills. The Third War resulted in many losses for the Sentinels, but the army still boasts a number of battle-hardened veterans.