The Warden's Cage sends the player off to find and talk to Sanoru.

Anchorite Ceyla wants you to enter the Warden's Cage, south of the Ruins of Baa'ri and interrogate Sanoru on Akama's whereabouts.

Completing quests for the Aldor will cause your Scryers reputation to decrease.

Arcanist Thelis wants you to enter the Warden's Cage, south of the Ruins of Baa'ri and interrogate Sanoru on Akama's whereabouts.

Completing quests for the Scryers will cause your Aldor reputation to decrease.

The fragments you obtained are only half of the medallion. The Ashtongue leader, Akama, must have kept the other half.

I dread to ask this of you, as Akama is both evil and cunning.

He and the Ashtongue Deathsworn - the vilest and most brutal of the tribe - are rumored to run a torture chamber inside the Warden's Cage.

I want you to find that dreaded prison, and find the whereabouts of Akama. His second in command at the location is a Broken known as Sanoru - interrogate him if you have to.

We've been expecting you, <name>. Akama said you would arrive sooner or later. 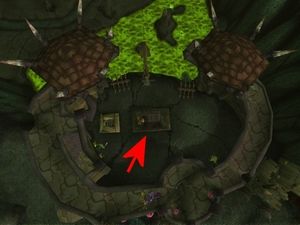 The Warden's Cage from above with a red arrow marking the stairwell to Sanoru.