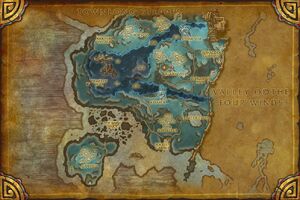 <Kil'ruk the Wind-Reaver defeated Warlord Gurthan centuries ago, but the mogu beastmaster's spirit continues to haunt the ruins of his old stronghold.

Showing proof of your victory over this spirit may gain you favor in the eyes of the Klaxxi.>

Gurthan was a coward who trained beasts to do the fighting for him and, in the face of death, chose to suspend his spirit in that urn.

Now we can have the pleasure of killing him as many times as we like.

This is one of the three "hidden" daily quests for the Klaxxi. Up at the Terrace of Gurthan's southwestern extent, an altar, two runes, an epitaph, and an urn can be found. Gurthan's Epitaph reads:

He waits for the EARTH to LAY before him, as beasts once did.

He waits for the SUN to KNEEL before him, as men once did.

The two runes are the Rune of the Earth and the Rune of the Sun. As the epitaph hints at, one adventurer must /lay on the earth rune, while another (at the same time) must /kneel on the sun rune. Two beams of light will connect to the urn, awakening Warlord Gurthan.

Gurthan is a level 90 elite mogu ghost with roughly one million health. Take him out, and loot the

[Ashes of Warlord Gurthan] from his corpse, then use the ashes to start this quest.

Wrap up any other daily quests in the area, then head back to Klaxxi'vess to turn in.