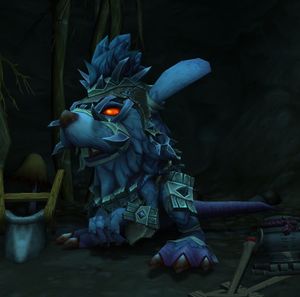 We've dealt with the alpha males. Now, the alpha female.

Virmen aren't terribly selective when it comes to breeding, but most broods will still have a dominant mother figure. She's usually bigger, meaner, and tougher than anyone else in the brood.

You know, I wouldn't mind testing my skills against a warren-mother. Mind if I fight alongside you?

("Chufa: You don't get to be a Warren-Mother by virtue of good looks.")

Ready when you are, <name>.

You go ahead. I'll meet you down there.

That should take care of the virmen for a few weeks, at least. Enough time for Mudmug to get out a few good batches of beer, uninterrupted.

And isn't that what's really important?

[87] Crouching Carrot, Hidden Turnip before heading out. Head down into one of the holes in the field to enter the Twisted Warren. Toss "carrots" to virmen and loot oats off the ground. In the middle of the warren at the bottom is Chufa, a level 86 elite virmen with 921k health and the following abilities:

The first half of the fight starts out normal, but get her to 50% health:

Chufa yells: Time for Chufa's surprise!
Chufa runs to her stash and puts on a... flamethrower?
Chufa yells: You're in for it now!