For the beta version, see

Search the Wreck of the Vanguard in Jade Forest for clues about its cargo, and recover the Encoded Captain's Log.

Alright, soldier. I've got a critical mission for you.

Get down to the coastline south of here - in the cove there you'll find a wrecked Alliance vessel. I need you to search it and find out if it was the ship that was carrying Anduin.

Then, recover the Captain's Log and see if it has any information on where we can find him.

Since the log is from a military ship, it'll be written using a cipher - take it to Nodd Codejack afterwards. He's keeping watch on the wreck from the other end of the cove.

Alright... let me see... using the cipher from when the ship went missing...

<Nodd is clearly doing some calculations in his head.>

Nodd Codejack says: Alright, I think I know what our next move's gotta be. 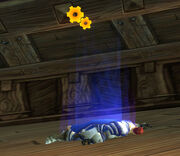 On deck by the stairs below deck 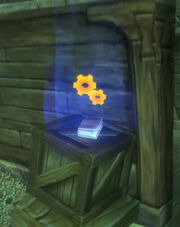 Below deck in the first room

Hanging on the wall to the back room

On the sand under the broken hull

[86] Hozen Aren't Your Friends, Hozen Are Your Enemies before heading out.

Head southwest from Rogers' position to reach the Wreck of the Vanguard. Get started killing hozen, and head to the stern of the ship or one of the port-side windows to get aboard. Grab the clues, then find Nodd.

On deck topside is an Alliance Bodyguard:

There is also a Horde Seadog and Alliance Cannon by the stern if you care to read them.

Horde Seadog
This Horde sailor likely met his end during the battle.
Alliance Cannon
The cannon is dented and streaked with gunpowder.

Head below deck. In the very first room is the fine leather journal:

Fine Leather Journal
Monogrammed on the leather cover are the initials, "A.L.W."
You take the few intact pages that remain.

Keep heading back in the ship. The banner is hanging on a wall and the naval map is on the sand beneath the ship (but still accessible from inside):

Naval Map
The map shows a naval strategy for defeating the Horde fleet.
Alliance Banner
The King's royal banner. Someone of royal blood certainly slept in this chamber.

In the last chamber is a Hozen Diver. Kill it to loot the