The White Stag and the Moon 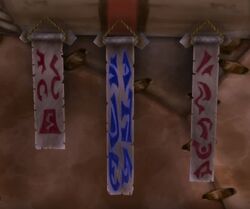 The White Stag and the Moon (center)

The White Stag and the Moon is a part of tauren mythology. It is recorded in-game on a wall hanging in the Archdruid's tent in Thunder Bluff.

The White Stag and the Moon

Into the brave hearts of her pure children, the Earthmother placed the love of the hunt. For the creatures of the first dawn were savage and fierce. They hid from the Earthmother, finding solace in the shadows and the wild places of the land. The Shu'halo hunted these beasts wherever they could be found and tamed them with the Earthmother's blessing.

One great spirit eluded them, however. Apa'ro was a proud stag of snow white fur. His antlers scraped the roof of the heavens and his mighty hooves stamped out the deep places of the world. The Shu'halo hunted Apa'ro to the corners of the dawning world - and closed in to snare the proud stag.

Seeking to escape, the great stag leapt into the sky. Yet, as his escape seemed assured, his mighty antlers tangled in the stars which held him fast. Though he kicked and struggled, Apa'ro could not loose himself from the heavens. It was then that Mu'sha found him as she chased her brother, An'she, towards the dawn. Mu'sha saw the mighty stag as he struggled and fell in love with him immediately. The clever moon made a bargain with the great stag - she would set him free from the snare of the stars if he would love her and end her loneliness.

Mu'sha loved Apa'ro and conceived a child by him. The child, a demigod some would claim, was born into the shadowed forests of the night. He would be called Cenarius, and walk the starry path between the waking world and the kingdom of the heavens.