The World of Warcraft Townhall/World Map

From Wowpedia
< The World of Warcraft Townhall
Jump to: navigation, search

This article is a copy of "The World of Warcraft World Map", an official article by Blizzard Entertainment. It presented the world map and several locations to be implemented in the game. The original article did not survive the overhaul of the World of Warcraft Official Website, but can still be viewed through online archives (see below). 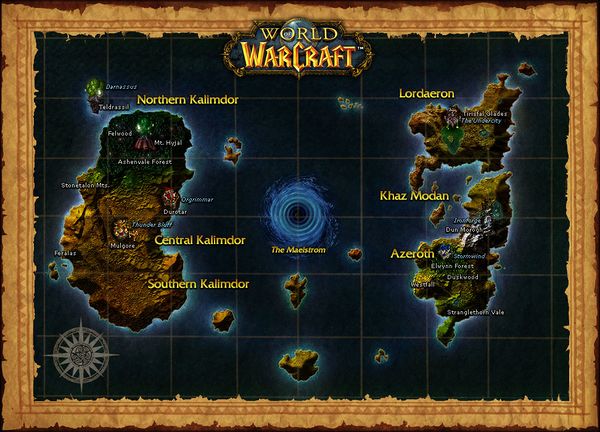 In addition to small towns, forts, and outposts there are 6 major cities in the world of Azeroth. Each of the major cities represents the capital and a major hub for the races that inhabit them. The cities are all radically different from each other in themes and appearances. More than just a collection of buildings with NPCs standing around, the cities will serve as a place for adventuring, shopping, training, socializing, and much more.

We will be revealing more information about the nuances of cities and the purposes they serve in the future. Check the news for updates. 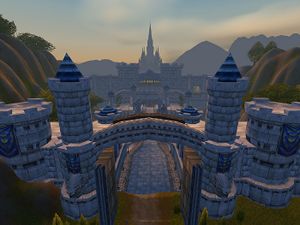 The city of Stormwind stands as the last bastion of Human power in Azeroth. Rebuilt after the Second War, Stormwind is a marvel of Human design and engineering. Stormwind's guards keep the peace within the city's walls, while the young king, Anduin Wrynn, rules from his mighty keep. The Bazaar District bustles with trade from across the continent and beyond, while Warriors of every sort can be found wandering the streets of Old Town. Unaffected by the ravages of the Scourge in the north, Stormwind still faces its own threats, both from without and from within. 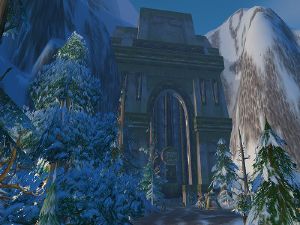 While many Dwarven strongholds fell during the Second War, the mighty city of Ironforge--nestled in the wintry peaks of Dun Morogh--was never breached by the invading Horde. A marvel to the Dwarves' expertise of shaping rock and stone, Ironforge was constructed in the heart of the mountain itself: an expansive underground city of craftsmen, explorers, miners and Warriors. Although the Alliance has been weakened by recent events, the Dwarves of Ironforge, led by King Magni Bronzebeard, are forging a new future in the world. 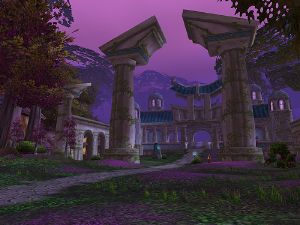 High atop the boughs of the great tree Teldrassil lies the wondrous city of Darnassus, the new refuge of the reclusive Night Elves. Druids, Hunters, and Warriors alike make their homes among the rows of woodcrafted lodges and delicately tended groves. The Temple of the Moon rises like a shining beacon above the trees, flanked by the colonnaded Hall of Justice, where the vigilant Sentinels gather to safeguard the land. Ruled by the high Priestess, Tyrande Whisperwind, Darnassus stands as a tranquil testament to all that the Night Elves hold sacred. A city in tune with the rush and flow of nature, Darnassus was built along the shores of a large lake, with elegant bridges spanning its crystalline waters. Elsewhere, the falling leaves of the forest carpet the soft pathways of the city. 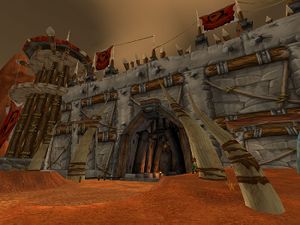 Named in honor of the legendary Orgrim Doomhammer, Orgrimmar was founded to be the capital city of the Orcs' new homeland. Built within a huge, winding canyon in the harsh land of Durotar, Orgrimmar stands as one of the mightiest Warrior cities in the world. Behind Orgrimmar's immense walls, elderly Shamans patiently share their knowledge with the Horde's newest generation of leaders, while Warriors spar in the gladiatorial arena, honing their skills in preparation for the trials that await them in this dangerous land. 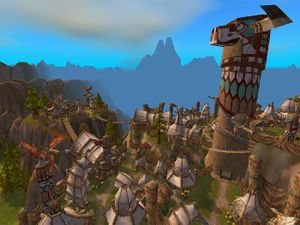 The great city of Thunder Bluff lies atop a series of mesas that overlook the verdant grasslands of Mulgore. The once nomadic Tauren recently established the city as a center for trade caravans, traveling craftsmen and artisans of every kind. The proud city also stands as a refuge for the brave Hunters who stalk their dangerous prey through the plains of Mulgore and its surrounding areas. Long bridges of rope and wood span the chasms between the mesas, topped with tents, longhouses, colorfully painted totems, and spirit lodges. The mighty chief, Cairne Bloodhoof, watches over the bustling city, ensuring that the united Tauren tribes live in peace and security. 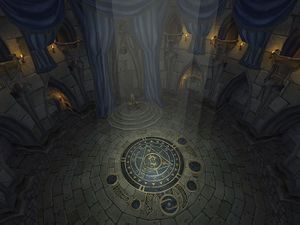 Far beneath the ruined capital city of Lordaeron, the royal crypts have been turned into a bastion of evil and undeath. Originally intended by Prince Arthas to be the Scourge's seat of power, the budding "Undercity" was abandoned when Arthas was recalled to aid the Lich King in distant Northrend. In Arthas's absence, the Dark Lady, Sylvanas Windrunner, led the rebel Forsaken to the Undercity, and claimed it for her own. Since taking up residence, the Forsaken have worked to complete the Undercity's construction by dredging the twisted maze of catacombs, tombs, and dungeons that Arthas began.

Off Kalimdor's northern coast lies the island of Teldrassil, the new home of the reclusive Night Elves and a stunning testament to the power of their magic and their connection with nature. After the cataclysmic events that followed the invasion of the Burning Legion, the Circle of Ancients and powerful druids combined their powers to grow an immense new world tree on Teldrassil. They called the tree Teldrassil, meaning "crown of the earth" in their native tongue. The night elves made their new home in the boughs of Teldrassil, creating a forest of mighty trees and flowing rivers, bathed in the endless night that fell over the lands of the elves from the dawn of time. However, the calm of the enchanted forest has slowly fallen into the shadow of a sinister presence. Crazed furbolgs and fouler beasts have appeared in Teldrassil, and it occupies all the attention of the vigilant Sentinels and the wise druids to ensure the safety of their new home.

A sprawling city of moonstone and wood, the night elf capital of Darnassus stands as a shining beacon atop Teldrassil. Within its mighty walls are housed countless druids, hunters, and warriors, led by the priestess of Elune, Tyrande Whisperwind. A stunning marvel to the ability of night elven craftsmen, the ethereal Temple of the Moon rises above the tree line, balanced by the druids' meticulously cultivated meditative grove. Trade from the main continent bustles through the city's trade quarter, where night elves, dwarves and humans alike haggle for wares and services. Delicate bridges and pathways crisscross the serene waterways of the city, the pristine waters reflecting the glowing light from the moons above.

The jagged, snowy peaks of Dun Morogh provide the Ironforge Dwarves with a limitless supply of ore and stone for their ambitious engineering endeavors. From the city of Ironforge, dug deep into the mountains, to Anvilmar in the Coldridge Valley, the marvels of Dwarven ingenuity mark the land. Not all is at peace in Dun Morogh, however. The Dwarves' insatiable digging at the Gol'Bolar Quarry unleashed a menacing tribe of Rockjaw Troggs from their subterranean den. While the massing Trogg invasion looms over the lands of King Magni Bronzebeard, the Frostmane Trolls have taken advantage of the distraction to attempt to reclaim their ancestral home. Life is harsh in the white-powdered mountains of Dun Morogh, but what the Dwarven people lack in height they make up for in heart and valor.

Elwynn Forest is a vast woodland that cradles the Human civilization of Azeroth. Though much of the area was burned or destroyed during the First War - when the Orcs laid siege to Stormwind - the giant trees and lush glades have grown anew. Heavily patrolled by the mighty Stormwind Garrison, Elwynn has remained a peaceful land since the war's end. Several farms stretch across the fertile fields, and the Garrison Guard Towers stand vigilant every few miles, helping to keep the forest safe from the rampaging forces of the Horde. The tranquil forest is also inhabited by wild Boars and Wolves that hunt throughout the woodlands in hope of finding easy prey. Scraggly Gnolls and grimy Kobolds wander the forest's outlying regions, but seldom do these timorous creatures attack property in Elwynn or Stormwind directly. For the most part, Elwynn exudes a feeling of comfort and serenity. However, if travelers wander too far off the main roads they may still encounter hidden dangers lurking within the shadows.

Once the lush southern belt of Elwynn Forest, the land of Duskwood has transformed into a dark and mysterious land. Many speculate that its proximity to the mysterious Deadwind Pass brings monstrous horrors out at night. Others wonder if an ancient curse has been cast upon the land. No matter the reason, Duskwood has become a land of terror and superstition. The Human farmers who once toiled over the rich land have become dark and brooding - unwilling to leave their ancestral home but unable to lift the terrible cloud that has settled over their lives. Bordered by the fallow fields of Westfall to the west and the dark, treacherous Deadwind Pass to the east, Duskwood has become a tainted realm where shadows and evil permeate the atmosphere even during the brightest hours of day.

Once the breadbasket of the kingdom of Stormwind, the land of Westfall has now grown fallow from years of conflict and neglect. Crops are no longer cultivated in the fields, and the once abundant mines have been deserted. Even the former defenders, the Stormwind Garrisons, pulled stake and abandoned the lonely realm when the cost of upkeep became too great. Due to this lack of military protection, Westfall has been all but destroyed by the rebel Defias Brotherhood and its demi-human minions. The Brotherhood, composed of thieves and bandits, have made Westfall their refuge. Employing everything from local superstitions to mechanical Harvest Golems, the Brotherhood will stop at nothing to scare away trespassers and protect their malicious schemes from being unraveled.

Stranglethorn is a vast jungle south of Duskwood. Once the extended homeland of the mysterious Jungle Trolls, Stranglethorn is now dotted with ancient ruins and crumbling Troll cities. In recent years, the Humans of Stormwind attempted to forge trade routes through this savage jungle. Though they did manage to establish the small port town of Blackwater Cove, they were quickly overwhelmed by a crazed pack of Trolls and driven back to their homeland. In the wake of the Humans' departure, the crafty Goblin Trade Princes arrived on the jungle's shores and quickly set up their mining and deforesting operations. The Goblins have maintained a tenuous hold over these remote facilities, but they remain threatened by the Jungle Trolls' growing obsession with purging their ancient lands of any and all foreign invaders.

The page can still be viewed here through the Wayback Machine. The thumbnail images were retrieved in the same manner.