Not to be confused with Zephyr. 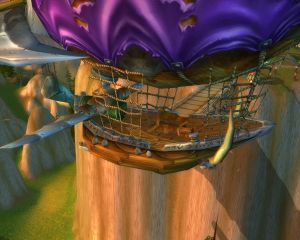 The Zephyr docked at the Spirit Rise.

The Zephyr is a zeppelin that transports players between Orgrimmar and Thunder Bluff. It starts in Orgrimmar at the western zeppelin tower overlooking the Valley of Strength, and it docks in Thunder Bluff at a platform at the edge of the Spirit Rise.

Unlike all other zeppelin, The Zephyr does not teleport near its destination, it flies in a straight path, much like a flight path. As such, the trip is somewhat longer than the usual zeppelin (at close to ten minutes for a round trip from Orgrimmar to Thunder Bluff and back), though it does provide a safe and scenic view of the Barrens (in that you are not being attacked by raptors, insects or quillboars during the crossing, which was partly the reason why the zeppelin was added in the first place).

With the path from the Southern Barrens now blocked by the Great Gate, this zeppelin is the only way to get in and out of Mulgore besides using the flight path or a flying mount.