The fate of Master Woo Ping 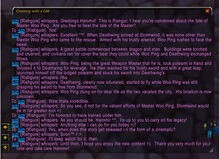 The fate of Master Woo Ping is a silly short story once told by the Game Master Rishgure to a player that was curious about the disappearance of master Woo Ping from Stormwind after the Cataclysm.

The story says that is in fact Woo Ping that saved the city from Deathwing even though the master disappeared during the epic combat. Due to the story coming from a GM, it attained a minor meme status.

(Note: This transcript contains only text concerning the story of Woo Ping; conversational text between the player and Rishgure is not represented.)

When Deathwing arrived at Stormwind, it was none other than Master Woo Ping who came to the rescue. Armed with his trusty arsenal, Woo Ping rushed to face the beast. A great battle commenced between dragon and man. Buildings were torched and crushed, and civilians ran for cover the best they could while Woo Ping and Deathwing exchanged blows.

Woo Ping, being the great Weapon Master that he is, took polearm in hand and thrusted it to Deathwing for leverage. He then reached for his trusty sword and with a great leap, launched himself off the lodged polearm and stuck his sword into Deathwing's ribs.

Deathwing, clearly now infuriated, started to fly while Woo Ping was still grasping his sword to flee from Stormwind. Woo Ping clung on for dear life as the two vacated the city. His location is now unknown.

If not for the valiant efforts of Master Woo Ping, Stormwind would be in far greater ruin.