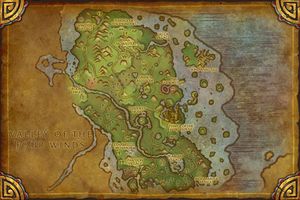 Speak with Chen Stormstout at the Thunderfoot Fields in the Valley of the Four Winds.

Things were not always like this, <race>. Oh no, they were much, much worse. Not three weeks ago, we were under siege by saurok bandits. They stole our jade, befouled our food stores, and terrorized our cubs.

We needed a hero, and a hero arrived.

He drove back their forces, defeated their leader, and returned our stolen jade. All he asked in return was a serpent ride for his niece.

I was never able to thank him. If you are headed to the Valley of the Four Winds, would you relay our thanks?

You come from the Temple of the Jade Serpent? Rain-Zhu sends his thanks?

Ai yah... really, that was nothing. I could have defeated that saurok without spilling my beer.

In fact, I believe I did.

This is an optional breadcrumb for players who have already hit level 86 by the time they reached the Temple of the Jade Serpent in the Jade Forest storyline.