What, Omnuron calls this a 'fact-finding mission?' Bah! Facts are best found on corpses!

Thisalee Crow is a young night elf druid and a member of the Druids of the Talon who commands the skies.[1] She can be found at the Shrine of Aviana and Sethria's Roost in Mount Hyjal. While loyal to Skylord Omnuron and the Guardians of Hyjal, she is reckless and headstrong in what she believes is the right way to protect Hyjal.

Thisalee first aids the players in defending the Shrine of Aviana from the attacking harpies led by Marion Wormwing, discovering they are working for the Black dragonflight. She leave it up to the player whether or not to kill the treacherous harpy matron. She later helps in the defeat of the black dragon attempting to corrupt and replace Aviana, Sethria.

[85] Druids of the Talon, during the Firelands Invasion, she is found inside the Molten Flow of the Molten Front.

Thisalee can be found in the Druid of the Talon camp in Skysea Ridge in Gorgrond as part of Garrison related quest. She instructed the adventurers to retrieve Iron Horde's shipments and kill Lieutenant O'rok from a nearby camp. After recovering Bladefury's orders, she moved to Cragplume Cauldron. She and the hero entered the cave, defeated its guardian and found the artifact the Iron Horde were after - the

[Heart of Gorgorek]. Together they escaped the cave and the artifact was placed in the Garrison.

After Azuka stole the heart, she moved to Gorgorek's Fall to face off the Warlord only to witness Gorgorek's revival.

She can also be seen watching fights between garrison commanders in the Coliseum of Highmaul.

Thisalee was captured by sea giants in Azsuna and was forced to battle in their underground fighting ring. She was rescued by the champions from the Dreamgrove.[2]

Thisalee is one among several other druids who come to Remulos and the Archdruid of the Dreamgrove's attempt to communicate with Malorne at the Well of Eternity in Mount Hyjal.[3] 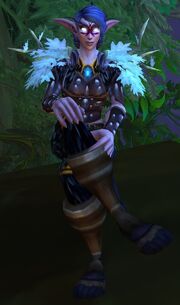 At the Dreamgrove, Thisalee received word that the Shrine of Aviana on Hyjal was under attack from the Burning Legion. Unwilling to stand idly by like the Druids of the Talon at the Dreamgrove who were planning strategy and defense, Thisalee made her way to Hyjal and asked the Archdruid to accompany her.[4] However, once the demons were fought off it became apparent that the attack on the Druids of the Talon was only a distraction. Thisalee called out to Aviana, beseeching her for an answer, and Aviana responded that her eyes and ears across Azeroth told her that Goldrinn had come under attack by the Legion at the Stormrage Barrow Dens.[5]

Thisalee and the Archdruid traveled to Moonglade, where they saved Goldrinn, who was asleep in the Emerald Dream, from eredar invading the barrow. When Goldrinn awakened he did not understand at first what had happened to him, but after learning that the Legion tried to corrupt him he decided that he would not be the only Wild God to be targeted. Thisalee and the Archdruid resolved to solve it,[6] but when the Archdruid returned to the Dreamgrove, Thisalee had vanished - she had gone to the Broken Shore to find the demon commander responsible.[7] The two of them discovered the commander to be an eredar named Commander Katith'rax, who swore to slaughter all of the Ancients when they engaged him. Ultimately, Katith'rax was killed and his plot against the Ancients stopped.[8] In the aftermath Thisalee pledged herself to the Archdruid, stating that while she loves Aviana she is a little too passive to follow around all the time, but the Archdruid is different.[9]

The Legion attacks the Shrine of Aviana a second time to steal the Idol of Aviana, during which it is revealed that Skylord Shadegrove is actually a dreadlord named Infazzar the Shade. The theft of the idol robs druids of their

[Flight Form], and with the fall of the shrine, the Druids of the Talon regroup to the Dreamgrove and build a new shrine on its northern border. Thisalee and the Archdruid travel to Azsuna, where they witness Infazzar using the idol to corrupt harpies with fel. They chase him onto his Legion ship with owls sent by Aviana, retrieve the idol, and the Cenarion Circle's champions cleanse it at the Dreamgrove's new shrine.[10][11]

She also traveled to the Jagged Cove on the Broken Shore to rescue saltwater cranes.[12]

Thisalee participated in the Battle for Darkshore. When the Alliance controls Darkshore, Thisalee is stationed at Bashal'Aran. She enlisted Alliance adventurers with striking against the Twilight's Hammer, who sought to take control of the elemental breaches within Darkshore as the Horde and Alliance were focused on one another.[13] 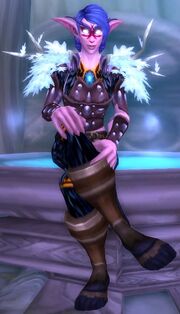 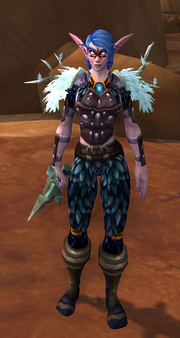 But occasionally I like to get my talons dirty.

If you let Marion live.

You're a better person than I, <player>. But I suppose the harpies are just pawns here.

This is it! You've found Aviana's Egg! Keep it safe while I go get help.