The Thondroril River forms a natural boundary between the Western and Eastern Plaguelands. The spring of this river is located in the current closed area known as Northern Lordaeron and runs from near the Terrorweb Tunnel to the north and empties out into Darrowmere Lake to the south. South of the lake it becomes the Darrowmere River.

Along the river on on both sides, you can find maggots, vampire bats, plaguebears, spiders and later snapjaws.

Prior to Cataclysm, Tirion Fordring (a level 61 elite quest giver) was found near a ruined farmhouse on the Eastern Plaguelands side of the river. 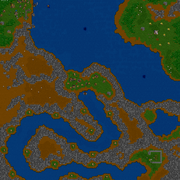