Thoras Trollbane was the human warrior king of the kingdom of Stromgarde.[3][4] He was a founding member of the Alliance of Lordaeron during the Second War. Years later he withdrew from the Alliance due to disagreements with his friend King Terenas. Thoras was ultimately murdered by his son, Galen, who sought the throne of Stromgarde for himself.[5] 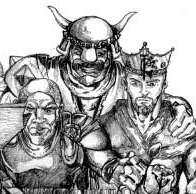 He was one of the human leaders who met at the councils to form the Alliance of Lordaeron.[3] Thoras was quick to agree to form the Alliance as he was a good friend of King Terenas and had a close relationship with Lordaeron.[6][7] Following the start of the Second War,[6] Stromgarde sent half of its standing army to the main Alliance forces,[8] for Trollbane felt that battle was to be had with the orcs in order to stop their threat. Genn Greymane didn't want to form a combined army but Thoras and his friend Admiral Proudmoore accused him of cowardice so Greymane relented to form the Alliance.[9] Stromgarde had little chance to show its offensive capabilities, as half of their army (the one that didn't go with Lothar) was defending the North lands from the Horde's invasion through the dwarven realm of Khaz Modan: which the Old Horde led by the Blacktooth Grin had already expanded into.[10][11]

Stromgarde came under heavy assault and losses. They lost their island citadel of Tol Barad but continued to battle through. They tried to ambush Cho'gall and kill him but they failed.[12] The Horde managed to destroy a good deal of Trollbane's kingdom, and continued its march towards the elven kingdom of Quel'Thalas.[13]

During the Siege of Lordaeron, Trollbane personally led his troops to cut the Horde reinforcements through the Alterac Mountains, rendezvousing with General Hath who confirmed Perenolde's betrayal and sent his troops to join Trollbane's in defending the mountain passes, and preventing the entire Horde from overwhelming Lordaeron's Capital City.[14] As the Alliance forces made their push to the south, Thoras sent a Stromgarde force under his nephew, Danath Trollbane, to retake Khaz Modan.[15]

Two years after the war ended, Thoras alongside other kings was present in Nethergarde to discuss the signs of the Dark Portal reopening. Back in Capital City, Thoras and Terenas were visited by the goblin Krix Wiklish who wanted to seal a deal with them. After the goblin left the two kings with Muradin Bronzebeard and Daval Prestor were discussing the matter of Alterac and Lord Perenolde.[16] Thoras was also then present in the Capital City's religion service.[17]

Following the destruction of Alterac after its deal with the Horde became known, Thoras Trollbane petitioned King Terenas to annex the eastern portion of Alterac's territory to Stromgarde in recognition of the latter's sacrifices and valor during the Second War.[18] Years later, he attended the ceremony in Stormwind where Arthas became a paladin.[17]

After the defeat of the orcs in the Second War, much of the Horde was wiped out and most surviving orcs were placed in internment camps. Trollbane, however, fervently disagreed with this policy, believing that the orcs were simply too dangerous to be kept alive. He argued with Terenas about this which was bitter for both as it was an argument between very close friends. In addition, the higher taxes, along with the high expense of maintaining and operating the numerous orc internment camps, led many leaders to believe that their kingdoms would be better off seceding from the Alliance. After the high elves left the Alliance, so did Gilneas and Stromgarde.[19] When Lordaeron refused to mass execute the orcs, a few years before the Third War, Trollbane sadly withdrew his support from the Alliance.[20]

At some point thereafter, Thoras was murdered by his son, Galen. However Galen accomplished it, before he died Thoras was aware Galen was the one responsible, and Galen was aware that Thoras knew it was him.[5] His body was laid to rest in his family tomb and he was succeeded as Stromgarde's ruler by the prince. 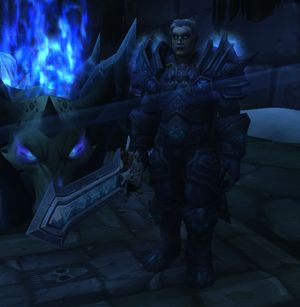 The Knights of the Ebon Blade sought out Thoras Trollbane's crypt and raised him as a member of their new Four Horsemen. Believing that he failed as a father for being murdered by his son, and as a ruler for his kingdom falling to ruin, Thoras left Stromgarde and joined the Ebon Blade to preserve peace on Azeroth.[5]

His first mission with the Ebon Blade was to join their assault on the Scarlet Monastery, where he lingered just outside the Chapel Gardens to condemn the Scarlet Crusade for preying upon innocent people.[21] He later aided the Ebon Blade in attempting to retrieve the body of Tirion Fordring from the Sanctum of Light beneath Light's Hope Chapel. After Darion sacrificed himself to allow them to escape, Thoras remarked in an entire lifetime of warfare he had never seen such sacrifice.[22]

Thoras participates with his fellow Horsemen, with the Deathlord and Minerva Ravensorrow mounted on Daumyr, to battle the demons on the Broken Shore. 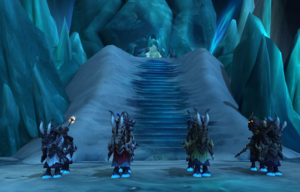 As the pandaren and allied races can become death knights, the four horsemen appear at the Frozen Throne. Darion Mograine sends the new death knights to travel to Orgrimmar if the death knight is Horde or Stormwind if it is Alliance and make a choice from the Hero's Call Board.[23]

Thoras Trollbane was a natural born warrior, one of the greatest Azeroth has known.[5] His people's lands were in the heart of troll-populated areas, and so being ready for battle was simply a way of life. Due to this, he is easily the largest and physically the strongest human king in the Alliance.[6] Thoras was a man of few words only speaking those needed - but when he spoke, only ever spoke truth, often saying the words others were afraid to speak.[5]

However, his gruff exterior hid a very sharp mind.[24] This often gives him an advantage when dealing with arrogant men. Trollbane was an old friend of King Terenas Menethil of Lordaeron,[25] likely known each other ever since they were young[citation needed]  and was his closest ally. Though their relationship soured after the war, they still respected each other greatly.[citation needed]  Trollbane was also a rival and an enemy of King Perenolde of Alterac, leading the armies of Stromgarde into battle against the honorable General Hath of Alterac on more than one occasion.[26] He wielded a mighty axe into battle during the siege of Lordaeron but he was also known to wield the dreaded sword Trol'kalar.[27]

The axe he wielded may have been the Trollbane.