Thori'dal, the Stars' Fury is the name of a legendary bow that drops from Kil'jaeden, who is the last boss of the Sunwell Plateau 25-man raid instance. This bow was the highest dps (level 70) weapon in game, excluding wands. Equipping the bow awards the Feat of Strength,

The legendary bow resonates with the power of the Sunwell. The origins and history of the weapon remain a mystery.[1]

A bow with the same model is wielded by the Ranger-general of Silvermoon, Halduron Brightwing. It hasn't been confirmed whether it is Thori'dal. In Legion, Thori'dal is hung on a wall of the Unseen Path's Trueshot Lodge, next to the

Before ammo was removed altogether in Cataclysm, Thori'dal generated magical arrows when the bow string was drawn, thus eliminating the need for the hunter to carry ammo. Attempting to add ammunition to the paper doll slot Thori'dal did not add extra DPS, and instead produced an error message, "Ammo slot full." The high DPS of this bow was most likely the result of this lack of need for arrows since there would be no +damage added from such. The contemporary top arrow (in Burning Crusade) was

[Timeless Arrow] with a +53.0 bonus, giving Thori'dal a comparative DPS of 109.8 - presumably. However, due to the nature of

[Steady Shot], this weapon vastly increased hunter DPS, in spite of having comparable DPS to

Originally, Thori'dal had a +15% attack speed effect not stacking with ammo quivers or pouches, allowing the hunter to carry a fourth normal bag. This was removed in Patch 3.1.0 when ammo bags no longer granted haste.

Although Thori'dal was obviously added for hunters, it is not limited to them and can be equipped by any class that can use bows, namely warriors and rogues. Despite its release at the end of The Burning Crusade expansion, it is still the highest level, permanent legendary weapon available to hunters.

So far the bow has no confirmed lore behind it. Indeed, it is the only permanent, legendary weapon available to players to have no story or lore to rationalize or explain its existence. 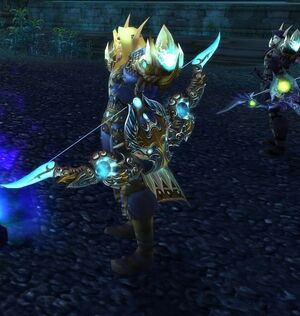 There has been some debate in the roleplaying community (and generally with those interested in lore) regarding the history behind Thori'dal. Even in the hands of Halduron Brightwing, it remains an enigma within the lore, with little-to-no information behind it.

A particularly popular theory is the notion that, with the RPG books rendered non-canon, Thori'dal is, in fact, the canon rendition of Sunstrider's Longbow, the legendary bow which the RPG books stated was wielded by Dath'Remar Sunstrider, and later, Ranger General Sylvanas Windrunner. It is possible that the legendary bow was lost when Sylvanas fell during the Scourge invasion, and was rediscovered and passed on to Halduron—Sylvanas's successor—after the victory at the Sunwell Plateau, just as it was once passed down to Ranger General Sylvanas.

In the Rise of Shadows expansion for Hearthstone, Thori'dal appears as an uncollectible weapon that can be equipped by Vereesa Windrunner's Battlecry effect.