The Thorignir are a group of storm drakes residing on the mountain of Thorim's Peak in Stormheim. They are the oldest and wisest dragons in Stormheim, and to fly with them is to sail amongst the gods themselves.[2] Unlike the storm dragons loyal to Nithogg to the north, the Thorignir swear fealty to the titan keepers and Odyn. They have also traditionally maintained a pact with the Drekirjar, allowing these vrykul to ride the Thorignir into battle as mounts. Recently, however, an alliance with the Burning Legion has set the vrykul against their former allies.[3]

The Thorignir have existed as one of several storm drakes colonies in Stormheim, though theirs was unique in its allegiance to the titanic keepers. As part of this commitment, the Thorignir are responsible for overseeing the Test of Will, a trial to determine the worthiness of those seeking the fabled Aegis of Aggramar, one of the five Pillars of Creation.

By the time of the third invasion of the Burning Legion, the faction's matriarch was its broodmother Thrymjaris, though Vethir has also been described as a leader of the Thorignir.[4] When the demons did arrive in Stormheim, they convinced numerous vrykul to join their side with promises of power. The Drekirjar, allies of the Thorignir for many ages, would break their ancient pact with the dragons and pledge themselves to God-King Skovald. In doing so they became the Felskorn, and effectively declared war on the Thorignir. Storm drakes soon found themselves being enslaved by the Drekirjar based from Hrydshal, acts which outraged their kin.

The God-King's main goal was to seize the Aegis of Aggramar, in the pursuit of which he eventually turned his attention on the Thorignir. Skovald had no intention of taking the traditional steps involved in the test of will, and instead launched an attack on Thorim's Peak to take the dragons' power by force. His forces drove the Thorignir back to the mountain's peak, and occupied their rookery. There, the Felskorn and their demon allies began to corrupt the storm dragon young, while the other Thorignir were helpless to prevent it. 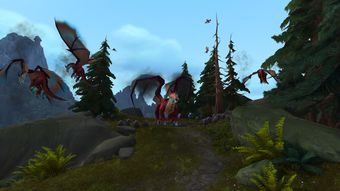 The Stormwing Rookery on Thorim's Peak

Many of the Thorignir were subsequently captured by the invaders, including Thrymjaris, almost heralding complete disaster for the colony of storm dragons.[5] It was only due to aid from outsiders working to defeat the Legion that the Thorignir were able to turn the tide. With the help of their new allies, Vethir and the remaining free storm dragons took the offensive and freed most of their captured kin. Having inflicted great losses on the Felskorn at the mountain's summit and liberating their broodmother,[6] the Thorignir proceeded to take vengeance upon Hrydshal itself.

The dragons unleashed their full power on the village, causing hundreds of casualties among the Drekirjar and crippling their ability to threaten the peak.[7] Though they would continue to enslave storm drakes, they ceased being a serious threat to the Thorignir. Vethir would continue to launch occasional attacks on Hrydshal in retribution for the vrykuls' actions, with great effect.[8] Now freed from the danger of the Felskorn, the Thorignir devoted themselves to preventing Skovald achieving his goals at the Gates of Valor alongside Odyn and his champions. Storm drakes would play an important role in defeating the Felskorn assault on the Gates, which ended with the God-King's death in the Halls of Valor.[9] This decisively concluded the Legion threat within Stormheim temporarily.

Eventually, however, the demons would return and once again assault the region in great numbers. The Thorignir would answer the call to defend their home once more, with Vethir and his fellow storm dragons leading the attack on the Legion army at Shield's Rest.[10] The Thorignir and Stormheim's other defenders would emerge victorious yet again, crushing the demonic assault before the Gates of Valor for a second time and securing their home from invasion.

It seems that Drekirjar vrykul managed to steal some of their powers, as Stormbreaker Reykir says You are not worthy of the Thorignir's power! and You have already failed. The Thorignir are broken! while casting a thunder spell called "Thorim's Bolt".