Were you looking for the Thorium Brotherhood? 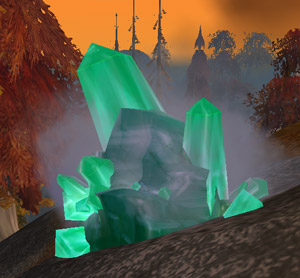 Thorium is a powerful metal mined on Azeroth. It borrows its name from the real-life radioactive metal thorium, which in turn was named after the Norse god of thunder Thor.

Thorium can be smelted into Thorium Bars. In addition to its inherent strength, Alchemists, Miners and Enchanters can further improve on Thorium (

[Enchanted Thorium Bar]) to allow for the creation of more powerful items.

The Thorium Brotherhood faction drew its name from the metal, as well.

Thorium is hard but not brittle, far lighter than it looks and glows even when cool.[1] It has, in the past, been described as "the strongest of metals".[2]

This rare metal combines the weight of lead with the strength of steel. Orcs prize it for weapons because the extra weight allows a skilled user to strike with more force. Thorium armor is amazingly heavy and strong — only adamantine pierces it with any degree of reliability. Thorium is heavier than most metals. An item made from thorium weighs twice as much as the same item made from other metals.[3]