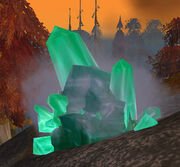 Thorium Ore is mined from various Thorium veins, with a minimum mining skill of 200. 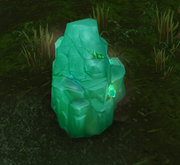 Small Thorium Veins can be mined at skill level 200, and produce 1 to 3 Thorium Ore. These appear in areas where the average mob level is between approximately 45 and 57.

Small Thorium veins are most commonly found in Swamp of Sorrows, Un'Goro Crater, and Winterspring, but are found elsewhere as well.

Rich Thorium Veins can be mined at skill level 200, and produce 3 to 5 Thorium Ore. These appear in areas of Azeroth where the average mob level is above approximately 55.

Rich Thorium Veins are most commonly found in Silithus, Swamp of Sorrows, Un'Goro Crater and Winterspring.

These veins are most commonly found in Silithus and Un'Goro Crater.

These items can be found in all varieties of Thorium Vein.

Thorium Ore is smelted into Thorium Bars at a forge, requiring a mining skill of 200 or more.

Thorium Bars are used in the production of many items made by Alchemy, Blacksmithing, Enchanting, Engineering, and Jewelcrafting.

Thorium Ore can be prospected (consuming 5 ore) with a Jewelcrafting skill of 200 or more, resulting in:

This rare metal combines the weight of lead with the strength of steel. Orcs prize it for weapons because the extra weight allows a skilled user to strike with more force. Thorium armor is amazingly heavy and strong-only adamantine pierces it with any degree of reliability.[1]