Not to be confused with Captain Thornby.

"We'll fight for Lordaeron! Get your swords!" 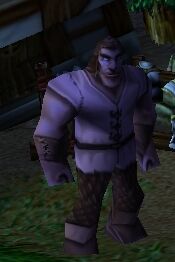 Thornby and Garth were villagers who offered to aid Prince Arthas Menethil in battle when the he passed through their village, located between a Silver Hand encampment and the town of Strahnbrad. Arming themselves as footmen, they helped Prince Arthas fight against the Blackrock Clan, gnolls and the Bloodhill Bandits.[1]

After becoming a Footman:

He may have been the same person as Captain Thornby, a Kul Tiras officer involved in Admiral Proudmoore's invasion of Durotar in Warcraft III: The Frozen Throne. However, as Strahnbrad stradles the border between historic Alterac and Lordaeron, Thornby would unlikely have been a citizen of Kul Tiras by birth. If the two were the same person, he has a past similar to the venerable paladin Dagren the Orcslayer, who joined Admiral Proudmoore's expedition after failing to defeat the Scourge in Lordaeron.