For the zone prior to the Cataclysm, see Thousand Needles (Classic).

Thousand Needles is a huge flooded canyon in Southern Kalimdor, filled with towering mesas. In the east, the canyon opens up to what was once the Shimmering Flats, where Fizzle and Pozzik's Speedbarge is located. Prior to the Shattering, the area was fairly peaceful for a contested territory and was considered to have its own harsh beauty. However, the entire zone was flooded in the Shattering and is now in turmoil.

Many residents, such as the centaur clans, have been wiped out entirely. The iconic Great Lift has been destroyed, while the Alliance outpost of Thalanaar on the Feralas border has been flooded and its residents moved to higher ground. Meanwhile the Southsea Pirates have gained a foothold in Southsea Holdfast, and the Twilight's Hammer cult controls several areas formerly of little interest or inaccessible altogether. The Horde forces of Freewind Post and the new Westreach Summit are now in a struggle for survival.

Even after the Shattering, most of the towering spires have camps, sometimes even entire towns built on them.[2] 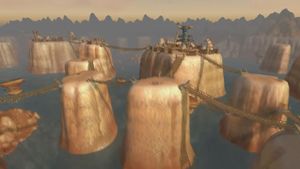 Connecting Feralas, the Barrens and Tanaris, the long barren canyons of Thousand Needles were traditionally the territory of several tauren tribes.[citation needed]  The tauren were forced to live precariously on the tips of the high mesas in order to avoid the large tribes of centaur that almost wiped them out. With the help of the Horde, the Tauren were fighting back against their enemies, including the fanatical Grimtotem tribe. The Shimmering Flats to the southeast were also the home of the world famous Mirage Racetrack, where gnomes and goblins raced their respective rocket cars in order to settle the question of which race had better engineering - at least until the next race.

It is suspected that ages ago Thousand Needles was once a small inland sea, or perhaps even an inlet of the Great Sea. This would explain the salt flat as well as why there are so many "needle"-like mesas, which may have been islands at some point. The cause for the sea's evaporation could be attributed to the sundering, which tore the ancient Kalimdor cleanly in two. A catastrophe such as this could easily have caused climate change.[citation needed]

Another theory states that a river with its source in Feralas, possibly Wildwind Lake, flowed into the area that would become Thousand Needles. The river cut through the earth, carving the canyon and shaping the dramatic pinnacles that became the Thousand Needles. It was a verdant, forested land. The river emptied into a large inland sea in the east. When the Great Sundering occurred, the course of the river was altered and ceased to flow through what would become Thousand Needles. The forests died and the fertile soil became orange dust. The inland sea, without its source of water, evaporated, leaving behind a vast salt flat.[citation needed]

It has also been thought by Falfindel Waywarder of Thalanaar that dark magic of some kind blighted the land.[citation needed]

In any case, upon Deathwing's return, the Cataclysm flooded this zone, turning the Shimmering Flats into a lake called the Shimmering Deep. Wreckage of the speedway can be found scattered throughout the area. Fizzle Brassbolts and Pozzik, a gnome and a Bilgewater Cartel goblin respectively, built "Fizzle and Pozzik's Speedbarge" in the middle of the Shimmering Deep. Although they did work together to create this mishmash island, the passive hostility between the Horde and the Alliance at the Speedbarge causes frequent bar fights.

During the Burning Legion's third invasion, the demons attacked the Needles, especially the home of the Grimtotem tribe, forcing Magatha Grimtotem ask the Earthen Ring for help. 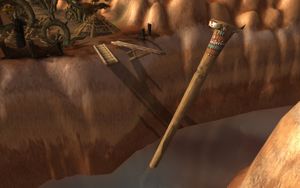 The Great Lift is no longer an option when traveling to or from Thousand Needles. 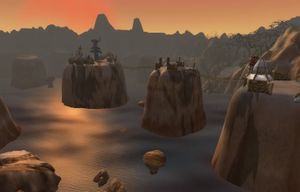 The results of the Cataclysm dominate the landscape.

Thousand Needles is accessible on foot from Feralas in the west, Tanaris in the south, and Southern Barrens in the north. Most players wishing to quest in this area will be sent here through bread crumb quests and be given a free flight from Feralas or Dustwallow Marsh to Darkcloud Pinnacle.

The path between Thousand Needles and the Barrens is currently overrun with quilboar, having been pushed to the brink of annihilation between the Alliance and Horde persecution and Mankrik's retribution. These mobs are relatively low level for the surrounding zones (in the 20s), so the path is not difficult to clear. Although the Great Lift has been ruined, there is plenty of water to cushion the fall for those interested in travelling by foot. Bear in mind, of course, the reduced mount speed in water will make travel annoyingly slow. It is best to follow the prescribed quests unless one has a flying mount. 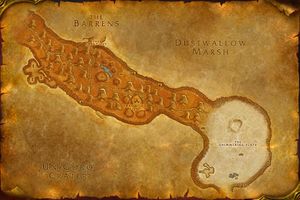 Map of Thousand Needles prior to Cataclysm. 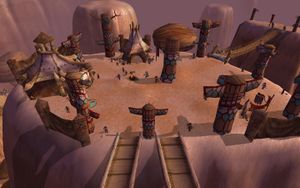 There are only two flight paths in Thousand Needles, one is the Horde-aligned Westreach Summit and the other is the flight path on Fizzle and Pozzik's Speedbarge. However, Alliance travelers can use the nearby New Thalanaar flight path to the west to help them navigate the zone. 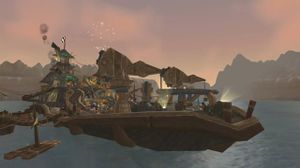 The Thousand Needles are home to several characters of note. At Freewind Post, Cliffwatcher Longhorn seeks aid in the battle against the evil Grimtotem Clan. At the Weathered Nook, Dorn Plainstalker attempts to teach members of the Horde about Faith, Endurance, and Strength. Where Kravel Koalbeard once sent bold adventurers around the world in search items that will give him personal gain in his bets at the gnome and goblin races at Mirage Raceway, Fizzle Brassbolts and Pozzik now have their boat.

All quests in the zone are level 40-45. There is is a neutral quest hub on Fizzle and Pozzik's Speedbarge, but overall the Horde is favoured much as it was pre-Cataclysm. 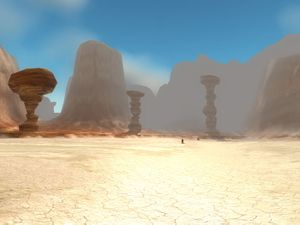 The Shimmering Flats prior to the flooding. 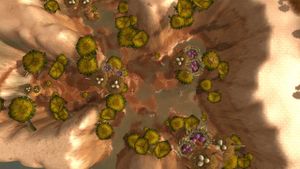 Even Highperch, home to the wyvern, was not left untouched by the flooding.

Before the Great Sundering, the region of the Thousand Needles was a river canyon, the spires of sandstone shaped from years of rushing water. Water flowed to the sea from a large lake to the east, fed by an underground tributary. Then came the demons and the destruction that threw the entire world into upheaval. The canyon was thrust above the water table; the eastern lake dried up and became a vast salt flat and Thousand Needles became a sandy gorge. Thousand Needles rises south of Dustwallow Marsh and serves as a channel to Desolace to the west or the Tanaris Desert to the South.[3]

The long canyon stands as a natural divide between central and southern Kalimdor. The realm gets its name from the dozens of giant, cylindrical columns of sandstone that rise from the bottom of the canyon like a forest. Bridges have been constructed atop many of the spires, connecting pathways across the canyon from one side of the surrounding mountains to the other. To the east of Thousand Needles, the canyon opened into a large, dry lakebed known as the Shimmering Flats prior to the massive flooding. This dried-out salt flat was actually below sea level. At its center stood an alkaline lake with ten times the salt of any ocean. This sere region was so hot, dry and salty that few creatures ventured here. Lizards, scorpions, vultures, and birds of prey were not uncommon, nor were centaur war bands. A contingent of goblins mined for oil in the Scorched Basin. The spire bridges allowed travelers to traverse the canyon without running into the barbaric centaur who patrolled the canyon floor. Even then the bridges were not entirely safe, however, as birds of prey would attack the unwary. Larger birds were even known to sabotage the bridges from time to time. There was very little of interest in this land, unless someone had a passion for salt or sandstone... or oil.[3]