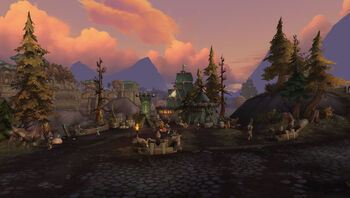 Thovas Base-Camp is campsite located in northern Tiragarde Sound, sitting just west of Hatherford and Boralus. The camp has been established by members of the Explorers' League to investigate the nearby Drust ruin of Gol Thovas.

The expedition departed from Boralus with a contingent of the Proudmoore Guard, before establishing themselves near the ruins' entrance.[1] Despite their preparation, the league members and marines were beset by Drust constructs woken at the site. It would only be with the aid of an Alliance champion that the situation could be salvaged, with the constructs pushed back and numerous relics recovered.[2]

North Sound Ferry is also found in the area.