While you were at the ruins dusting off tablets for my father I lost five scouts to wandering mogu patrols.

These creatures apparently have little interest in peace and are about as trustworthy as the Horde.

They are too numerous and we are too weak, however.

Go to the ruins west of here and cull the mogu numbers. They won't be expecting a <class>.

Kang has been sharing stories with me about these mogu.

Apprently ages ago they ruled as emperors subjugating all free races of Pandaria and the surrounding regions. Now they are little more than hoodlums.

To see these mogu fight, though, I suspect they are trying to rekindle some of their older ideals and ambitions.

Well done, <name>. Another few missions like that and we might have to make you an honorary Sentinel. 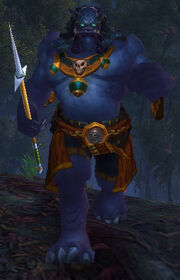 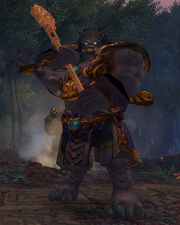 [87] Lotus Tea before heading out. Follow the road south and west, cross the Dojani River, then keep going west when the road turns north to reach the Ruins of Dojan.

Imperial Lotus is all over the grounds and gathered 2-4 at a time. As are the Dojani Surveyors and Dojani Reclaimers. Feel free to turn in Lotus Tea as soon as the 20th set of leaves are gathered - Kang will not leave the player. Up at the higher level of the ruins is the Dojani Dominator, a level 86 mogu with 368,000 health. Kill him to loot the Dojani Orders from him. He is shared-tap, so don't worry about having to get the only tap if the area is busy. Where are the Pools is remote-completable, so finish the quest in the ruins and pick up

Just to the northwest of the dominator's position is a bridge. Cross it to reach the Pools of Youth, where Na Lek is frozen in the middle of the pool. Speak with him:

<Na Lek smiles at you, and you feel young as though you have not felt in years.>

A Sleeping Guardian, a level 86 quilen with 384,000 health, awakens and has the following ability:

However, players will not have to fight all by themselves, as Na Lek channels a healing aura that heals for 3583 health a tick.

Na Lek embues <name> with gratitude and returns to the waters of the pool.
Kang Bramblestaff says: Look at that. The little guy left you some purified water.

Loot one of the water pools, jump down to the lower road, and return to the Incursion.