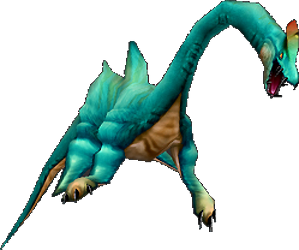 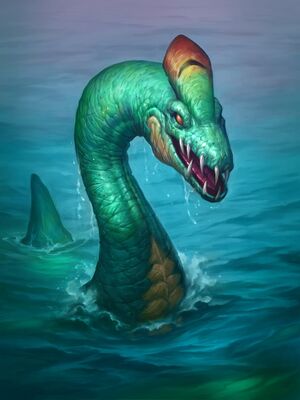 A threshadon or thresher is a large, long-necked aquatic reptile. They are found in the watery areas of Darkshore, Sholazar Basin, Dustwallow Marsh, the Wailing Caverns, the Wetlands, the Grizzly Hills and other areas. They produce ambergris.[1] The threshers of Dustwallow Marsh produce a type of oil that was formerly used to fuel the Theramore lighthouse.[2]

They can also be found in the waters of Kul Tiras. The Anglepoint Packing District processes them into food.

The huge, reptilian beast lumbers awkwardly on four squat legs. Its muscular neck is long and flexible, capped by a relatively small head decorated by a colorful fin. Its mouth is filled with long, rounded teeth that appear designed for chewing plants but seem equally capable of crushing armor and snapping bone.

Threshadon are amphibious herbivores that typically live in freshwater lakes or marshes. Their long, flexible necks enable them to eat leaves off the tops of trees and to nuzzle down into muddy lake floors for algae and lichen. They tend to be passive creatures, preferring to graze unmoving in one spot until they are forced to seek additional sources of food elsewhere. Threshadon usually stand in medium-depth water, with the tops of their backs exposed to the heat of the sun and their long necks free to graze. When threatened, they often retreat to deeper water for protection.

Threshadon are primarily motivated by hunger. Their huge bodies require almost constant nourishment, so they migrate frequently whenever they exhaust all edible plant life in an area. They travel in loose herds that are led by a dominant male. When grazing sites are found, the beasts scatter out in a vast circle with pairs grazing together for protection.

Their most dangerous natural enemies are murlocs. Twice a year, murloc tribes engage in ceremonial hunts, prowling lakes and streams for threshadon. Murlocs prize the threshadon's back fins as material for crude shields and armor and extract a greenish mucus from the colored head fin for use by chieftains as a powerful aphrodisiac.

Though an herbivore, a threshadon aggressively defends its territory. It attacks anything it notices. The creature is strong, fast and highly maneuverable in water, able to turn quickly and lunge at prey with its long neck.[6] They will not hesitate to eat meat, as humans fear them.[citation needed]

The threshadon resembles a plesiosauroid, a clade consisting of long-necked plesiosaurs that lived in the Jurassic and Cretaceous periods.