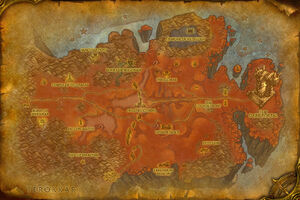 The Throne of Kil'jaeden is a massive mountain located in northern Hellfire Peninsula, northeast of the Horde outpost of Thrallmar.

The mountain was so named by the warlock Gul'dan. Shortly before the opening of the Dark Portal, Gul'dan called the orc clans to the mountain to drink the blood of Mannoroth, thus enslaving them to the Burning Legion's will.[1]

The mountain is also a place of a great flaw in the fabric of the universe that was connected to the lair of Kil'jaeden on Argus.[2]

After Lord Kazzak re-opened the Dark Portal, he could be found at the Throne where he was defeated by the adventurers. Later, after the presumed defeat of Kael'thas Sunstrider, his blood elven forces were led through a portal from here to the Isle of Quel'Danas.[3] The highest-ranking members of these forces were allowed to consume demon blood, becoming the first felblood elves. Some remained at the throne and continued to consume demonic energy.

The location is only accessible by flying mount or by the

[Captured Legion Scroll], and it is not recommended for anyone without at least a small group to venture there, for the elite demons roaming the area are almost as challenging as their leader, Doom Lord Kazzak.

The Throne of Kil'jaeden became a daily quest location for the Shattered Sun Offensive, and the mobs were changed. There are now many felblood elves siphoning the life forces of suspended Terrorguards, as well as wandering Wrath Heralds and Incandescent Fel Sparks.

The subject of this section was removed from World of Warcraft in patch 2.4.0.