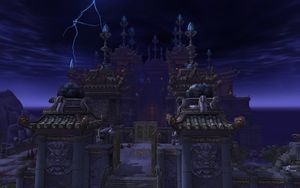 The Raid Finder version of the Throne of Thunder is divided into 4 different wings, and each wing opened a week (or two) after the previous. The instance opened on 5 March 2013, Heroic mode and "Last Stand of the Zandalari" LFR opened on 12 March, "Forgotten Depths" LFR opened on 19 March, "Halls of Flesh-Shaping" LFR opened on 2 April, and "Pinnacle of Storms" LFR opened on 16 April.

Join the Shado-Pan Assault in their singular drive to see Lei Shen, The Thunder King defeated once and for all, and gain access to impressive Valor reward items. Reputation with this faction can be earned only within the Throne of Thunder raid dungeon.

Once the young Lei Shen had come of age and commanded his own legions, he announced his intent to awaken the gods. Only his most loyal of followers accompanied him where no mogu had dared tread: into the very heart of the Thundering Mountain, the sacred home of the one the mogu had called their master.[1] What he found was illuminating: the titanic watcher Ra-den, who stood guard over a powerful titan device, the Engine of Nalak'sha. Lei Shen claimed dominion over both.[2] It is said that he tore out the very heart of the mogu god. And from that hateful act, he gained power over wind and storm.

Lei Shen, now calling himself the "Thunder King", declared the Thundering Mountain to be his seat of power and atop its summit he built a majestic and forbidden city.[3] Following the Thunder King's death, the new emperor, Dojan Firecrown, moved the capital of the empire from the barren Throne of Thunder to Mogu'shan Palace in the fertile Vale of Eternal Blossoms.[citation needed]

When Pandaria separated from Kalimdor many thousands of years ago, a veil of mist kept outsiders from discovering the newly-formed continent. The mists also hid a reminder of an ancient evil: Lei Shen's Throne of Thunder. During his rule, this fortress was the seat of the Thunder King's power. Even after his death, great swathes of corrupted energy lingered, and now, the resurrected Thunder King and the Zandalari trolls intend to harness that energy to establish the reign of Lei Shen once again.

Last Stand of the Zandalari

The forces of the Zandalari have rallied in the ruins surrounding the Thunder King's island citadel.

Beneath the foundations of the Throne of Thunder lie vast caverns, teeming with ancient horrors.

In the horrific chambers beneath Lei Shen's citadel, the mogu conducted terrible experiments into reshaping life.

From within his inner sanctum, the risen Thunder King plots the return of the great mogu empire.

First get to the Isle of Thunder by taking a portal from the faction camps outside Shado-Pan Garrison in Townlong Steppes. The Alliance camp is at [49.7, 68.7]

to the southeast. Once on the isle, head to the Diremoor and follow the main path northeast through the jungle. At the Emperor's Gate, turn left and head due north to find at [51, 47]

a sewer entrance called the Bleak Hollow, which is a small Shado-Pan camp. The sewer grate will teleport adventurers to the inner courtyard and at [63.7, 32.2]

In addition to the items in the tables below, all bosses have a chance to drop

[Secrets of the Empire] for

[90] Secrets of the First Empire, the last six bosses (Durumu to Lei Shen) have a chance to drop a

[Heart of the Thunder King] drops from Lei Shen for