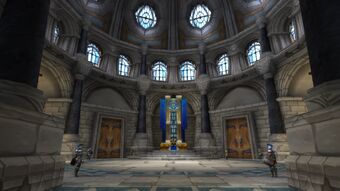 The throne room of Stormwind City is located deep within Stormwind Keep. This dome-shaped hall contains a large throne that is flanked by golden lions. The throne is known as the Lion Seat[1] and it is found in the center of the room, surrounded by the Royal Guard. The recently returned King Varian Wrynn resided here until his death, after which his son Anduin Wrynn took his place on the throne. The throne room also grants access to the map room behind it, containing the battlemasters and Grand Admiral Jes-Tereth.

It is here that Stormwind kings are crowned.[2]

The throne room as of World of Warcraft: Katrana Prestor, Anduin Wrynn, and Bolvar Fordragon.

Garona Halforcen, compelled by the Shadow Council, killed King Llane Wrynn in the throne room during the First War.[2] The assassination was witnessed by the young prince Varian Wrynn.

During the absence of his father, Anduin Wrynn watched over the city in his father's stead. Lady Katrana Prestor and Highlord Bolvar Fordragon aided the ten-year-old king in his rule, though many remain critical of Stormwind's interim government. Accusations of corruption within the House of Nobles ultimately led to the source of this discord, yet order and integrity was restored to the Stormwind government with King Varian Wrynn's return and the dispatching of the shadowy Lady Prestor by brave heroes, revealing her true identity as the black dragon Onyxia, but not before she kidnapped Anduin and killed Reginald Windsor, who gave his life to protect the young Prince.[2]

During the Elemental Unrest, a meeting of the Alliance leaders gathers in the throne room (for the Horde version, see Grommash Hold). On the first step of the dais stands a semi-circle facing Varian Wrynn, starting from the left: High Priestess Tyrande Whisperwind, High Tinker Gelbin Mekkatorque, King Magni Bronzebeard, a curiously empty space where another person could stand, then Lady Jaina Proudmoore and Prophet Velen.

Since the Cataclysm and the joining of Gilneas into the Alliance, Genn Greymane took place at the right side of the throne.

During the Remembrance Day, the Honor Delegation was present in the throne room. They met with each other, and then with King Varian. Among them were several nobles who complained about costs of the Alliance wars.[1]

During the Burning Legion's third invasion, a memorial service for the deceased King Varian Wrynn was held here and the demons invaded the Keep and attacked Alliance leaders.[3]

The throne room was infiltrated by the Veiled Hand. The majority of its guards were knocked unconscious, fel fire caught several spots, and a giant rune was put on the floor. The entrance to the garden was magically blocked by a ritualist who summoned a current of wind into the room.[4] 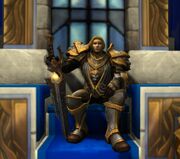 King Anduin Wrynn sitting on the Lion Seat with Shalamayne.

King Anduin Wrynn, Genn Greymane, Jaina Proudmoore, and Mathias Shaw held a war council here following the Battle for Lordaeron. With their Zandalari prisoners gone and aided by the Horde, Jaina decided to return to Kul Tiras and bring the kingdom back to the Alliance.[6]

The throne room is depicted similar to its World of Warcraft incarnation but there are some differences. On the ceiling, there is a map of the Seven Kingdoms.