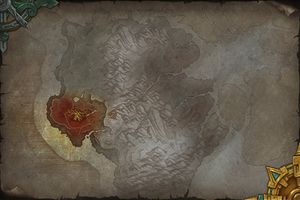 Map of "Thros, the Blighted Lands".

Thros, the Blighted Lands, is a realm where the Drust and their king Gorak Tul have resided in since their war against the human sailors. This death realm is also inhabited by strange fiends. The entrance to Thros is the great tree Gol Inath. It can also be accessed through the island of Fate's End or through magical rituals.[1]

The ancient Drust used to live in harmony with nature, their druidic ways preserving the balance of the wilds. When humans started to settle Kul Tiras and the region of Drustvar, the Drust and their King Gorak Tul declared war on them. However, not all Drust agreed with this, and the Thornspeakers left Drust society.[2]

As the war went on, the desperate Drust called onto dark powers. Unbeknownst to them, they had reached the Emerald Nightmare.[3] Their fallen warriors would find refuge in Thros, an offshoot of the Nightmare which they named differently as they were not aware of what the Nightmare was.[3] Having run out of living warriors in his war, Gorak Tul began to bind his people's souls to stone constructs. Though the Waycrests had wiped out the Drust, they did not succeed in killing Gorak Tul, who had escaped.[4]

Gorak Tul, trapped within the Blighted Lands, bided his time, waiting for an opportunity to exact his revenge. After countless years, he recently corrupted the House Waycrest, the seat of power of Drustvar, and Lady Waycrest formed a group of witches known as the Heartsbane Coven. Gorak Tul and his new followers then feverishly conspired to release him from prison.[5]

The Heartsbane conducted a ritual at the great tree, Gol Inath. The spirit of the Drust were summoned in the physical world and were given bodies to inhabit through wicker constructs. They were however defeated by Inquisitors from the revived Order of Embers, and Gorak Tul was pushed back.[6] Later, Lady Waycrest provided herself the means to his return in Waycrest Manor,[7] which was built above ancient Drust ruins. Gorak Tul re-entered the physical world through the Rupture under the manor, but he was pushed back once more, his spirit still residing within Thros.[5]

Unbeknownst to Katherine Proudmoore, her daughter Jaina Proudmoore had been sent off to the island of Fate's End as punishment, which none returned from due to being pulled into the Blighted Lands.[8] Together with an Alliance emissary, Katherine later ventured into Thros, where Ulfar said Gorak Tul was most vulnerable.[9] While in the realm, they came across five dead captives on the road; Katherine took this as evidence that the Drust were not interested in keeping their prisoners alive. They saved Jaina, and defeated Gorak Tul within his own realm, after which Jaina teleported everyone back into the physical world.[10]

The Drust invade from Thros into Ardenweald, part of the Shadowlands. They seek to use Ardenweald's power of rebirth to free themselves from Thros.[11]