Through the Dark Portal 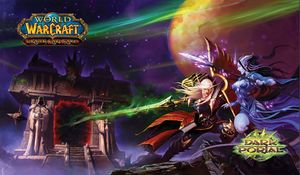 Through the Dark Portal is the second set of the World of Warcraft Trading Card Game.

A storm rages in the Blasted Lands as evil stirs within the Dark Portal. Bloodshed in Azeroth intensifies as the Blood Elves and Draenei join the frey. Already, the great conflict spills over into the other world... the Burning Legion looks on and plots its next move. Grab your weapons and make ready, the darkness is upon us!

As the name suggests, this set is set after the reopening of the dark portal. As such, many new Draenei heroes and allies are found amongst the Alliance, and new Blood elf heroes and allies are found amongst the Horde. Quests and items from Outland are also first featured in this set. However, there is no strict focus on the Burning Crusade-era, and the vast majority of allies, quests and items are still from Azeroth.

This set introduced some of the racial abilities from WoW to the card game.

This set introduced a single race-exclusive rare ally for each of the ten main races. All nine classes are represented amongst the allies, with an extra warrior.

Amongst the horde allies are three rogues that are named after bad behavior found in some WoW Players.

This set introduced a single race-exclusive quest for each of the ten main races. All quests are classified as rare, except Lazy Peons, which is common.

This set introduced a single race-favoring common quest for each of the ten main races. Where most races would have to choose between two card effects, the favored race uses both.

Two tauren druid sisters, one specializing in survival, the other in attack. They represent the two playstyles feral druids used to have before the creation of the guardian specialization.

Entertainment.UpperDeck.com World of Warcraft TCG Products — Through the Dark Portal

Entertainment.UpperDeck.com Through the Dark Portal Sneak Previews on March 31st, 2007!