This article is about the tauren city. For the in-game faction of the same name, see Thunder Bluff (faction).

“Greetings young one, and welcome to Thunder Bluff. You'll find safe refuge from the burdens of the world here. All denizens of the Horde are welcome here.
The spirits of the present and past come alive here in this sacred place, my friend. Honor them, and in doing so honor yourself.”

Thunder Bluff (sometimes spelled as Thunderbluff)[1][2][3][4] is the tauren capital city located in the northern part of the region of Mulgore on the continent of Kalimdor. The entire city is built on bluffs several hundred feet above the surrounding landscape and is accessible by elevators on the southwestern and northeastern sides. Established by the wise chieftain Cairne Bloodhoof and his stalwart tribe, Thunder Bluff overlooks the verdant land of Mulgore from atop a series of windswept mesas. Prior to the construction of the capital, the tauren had lived as nomads for countless generations, often under attack by marauding bands of centaur. With Thunder Bluff’s founding, however, the proud and good-spirited race was finally granted a permanent home.

The Third War and after

With the orcs' help, Cairne and his Bloodhoof tribe were able to drive back the centaur and claim the grasslands of Mulgore for their own. For the first time in hundreds of years, the tauren had a land to call their own. Upon the windswept mesa of Thunder Bluff, Cairne built a refuge for his people, where tauren of every tribe is welcome. Over time, the scattered tauren tribes united under Cairne's rule. There are a few tribes who disagree about the direction their new nation should take, but all agree that Cairne is the wisest and best suited to lead them towards the future.[5]

Rexxar and his companions were tasked by Tagar with driving the Stonetalon harpies away from the tauren's kodo herds, for the foul creatures were slaughtering them and leaving their bodies to rot. Mulgore was also home to a large group of centaur, who had captured Baine and thrown Cairne into despair. With the help of Bovan Windtotem, Rexxar rescued Baine and brought the tauren back into the Horde.[6]

The city of Thunder Bluff lies atop a series of mesas that overlook the verdant grasslands of Mulgore. Once a nomadic people, the tauren recently established the city as a center for trade caravans, traveling artisans, and inventors of every kind. The proud city also stands as a refuge for the many hunters who stalk their dangerous prey through the Barrens and its surrounding areas. Long bridges of wood and rope span the chasms between the mesas, and each mesa is topped with tents, longhouses, colorfully painted totems, and spirit lodges. The mighty chief, Cairne Bloodhoof, presides over the bustling city, ensuring that the united tauren tribes live in peace and security.[5]

Thunder Bluff is the first city of its kind; for centuries, the tauren wandered the plains as nomads, unable to claim a permanent home. All Horde visitors are welcome here, and the expertise of the tauren in professions ranging from leatherworking to shamanism, druidism to hunting are all practiced and taught here. Unfortunately, the central location of the Thunder Bluff also makes it easily accessible to members of the Alliance. Thus, it is often one of the easier Horde capitals for Alliance players to raid, with Baine being killed long before Horde reinforcements even become an issue.

Thunder Bluff as seen in The Comic.

Thunder Bluff as seen in The Comic.

In order to gain access to Thunder Bluff, visitors must either ride wyverns to the top one of the four towering mesas, use the zeppelin from Orgrimmar or be lifted via rope and wood elevators from the foot of the bluffs, an invention unique to the tauren.

Some time prior the Lich King's awakening, Thunder Bluff's Pools of Vision became haunted by an element rumored to be summoned by Magatha. The city was visited by Rehgar Earthfury and his two gladiators - Broll and Lo'Gosh who destroyed the element and eventually escaped from slavery. A human assassin from Assassin's League also visited Magatha in order to learn the location of Lo'Gosh.

Thunder Bluff was enveloped by the mists of the Nightmare but Malfurion was able to find and recruit Baine in the city.

The city was attacked by furious elements but the attack was repelled.

Following Cairne’s death in a duel with Warchief Garrosh Hellscream, Thunder Bluff was briefly seized in a coup by Magatha Grimtotem and elements of her tribe. Thunder Bluff became sabotaged by the Grimtotem Clan assassins. Their targets were experts in weapons, powerful druids, or shamans. They headed to the Spirit Rise, where The Skychaser clan's members were all murdered. The Forsaken below were supporting the Grimtotem, thus they needn't be worried. The hunters of the Hunter Rise were also killed and some others who could lift a weapon were also killed to struck fear to remaining tauren. The reign of Grimtotems was short-lived, however. Thanks to the effort of Jevan Grimtotem and Jaina Proudmoore, Baine was able to rally an army and buy weapons needed to defeat the Grimtotem in Thunder Bluff. In retaliation, Cairne's son, Baine, launched a brilliant counterattack using a fleet of zeppelins. After he strategically divided Magatha's forces, Baine recaptured Thunder Bluff and assumed his role as the high chieftain of the tauren. Having recovered from the recent unrest, the capital is once again a bastion of peace and security for Kalimdor's tauren. Magatha and her loyalists were sent to an exile. Jevan became the leader of the Grimtotem who remained with the Horde and he remained in Thunder Bluff.

Thunder Bluff after the Cataclysm.

Thunder Bluff appears in the Emerald Nightmare with the rises being shattered and the city floating on its side. In the physical world, Thunder Bluff is under attack by infernals.[7]

After the Argus Campaign and the Orgrimmar parade, Thunder Bluff hosted the Warchief Sylvanas Windrunner and several representatives of other Horde races to speak about the tragedy in Silithus on the behest of Archdruid Hamuul Runetotem. Soon after, they were joined by Magni Bronzebeard who warned the Horde about the injuries of Azeroth.[8]

Thunder Bluff held a feast for the Highmountain tauren from Highmountain on the Broken Shore. The whole city was celebrating with fireworks until it was attacked by the minions of the Old Gods who sensed Spiritwalker Ebonhorn. They trapped the city civilians with the void power turning them unresponsive. The city was defended by Horde adventurers, Baine Bloodhoof, his personal guards, as well as the city guards who killed the void minions and their leader, Qy'telek.[9][10][11]

Tauren warbraves were sent from the city into the Barrens.[12]

After Baine was rescued from the Underhold by Thrall and Jaina Proudmoore, they feared Sylvanas Windrunner would burn Thunder Bluff like she did Teldrassil.[13] It was also attacked by malevolent spirits from the Shadowlands but successfully defended by Baine and the tauren hero.[14]

The citizens of Thunder Bluff would support Varok Saurfang in his revolution against Sylvanas, though Baine's wounds would force him to remain within the city rather than march to Orgrimmar by Saurfang's side. Ji Firepaw, Aysa Cloudsinger, Mayla Highmountain, and their forces would reinforce the city's defenses in case Sylvanas launched a counterattack.[15] During the conflict, Saurfang challenged Sylvanas to a Mak'gora, which ended in his death and Sylvanas's abandonment of the Horde. A stunned Lor'themar ordered for champions to report what had transpired to Baine. With Thunder Bluff no longer under the threat of an attack by Sylvanas, the reinforcements left the city as Baine, Ji, and Mayla traveled to Orgrimmar to attend the funeral of Varok Saurfang.[16]

Baine Bloodhoof and Mayla Highmountain were in the city, when the Mawsworn attacked, and captured Baine.[17]

Thunder Bluff is located in the far north of Mulgore, among the sprawling flatlands of the Golden Plains. The city is composed of four towering mesas or rises. The only entrances from the plains below are elevators leading to the central platform. The central rise is connected to the others through large wooden bridges.

The various rises in Thunder Bluff act a bit like neighborhoods or quarters in a human city,[18] or the valleys and keeps of the orcish city Orgrimmar.

The new Chief of the Bloodhoof clan, Baine Bloodhoof has become the High Chieftain of the tauren race in wake of his father's death. He watches over Thunder Bluff, and over his people in an ever-darkening world. Baine can be found in the chieftain's tent in the eastern main city and is accompanied by his Honor Guards.

Hamuul Runetotem is the elder druid of Thunder Bluff, and a childhood friend of Cairne. Although he at one point left to fight on Mount Hyjal, he can always be found on Elder Rise.

The centaur were driving the tauren out of their homeland around the time of the Third War. When Thrall and his Horde arrived on the continent, an alliance was forged between the Horde and the tauren. Following the defeat of Archimonde and the end of the war, Thrall helped the tauren rout the centaur and reclaim their land. Shortly thereafter the tauren founded the city of Thunder Bluff and began the process of settling into their old surroundings and repairing the ecological damage the centaur had wrought. Thunder Bluff grows and expands at a tremendous rate.[19]

The city was described as being built atop a near-impenetrable mesa deep in the south of Mulgore.[20] The weather is almost always warm and sunny, with intermittent breezes carried in from The Barrens.[18]

Although some of the historically nomadic tauren probably miss their itinerant lifestyle, they are intensely proud of their permanent home and spend much of their time trying to make it better. They gladly accept the help of the orcs and trolls that help them, but are somewhat less enthusiastic at the presence of the Forsaken, whom they only grudgingly tolerate because of their membership in the Horde. Tauren place a strong emphasis on the value of life, and the unlife of the Forsaken stands as an affront to their beliefs,[21] not to mention the less than honorable activities the Forsaken carry out. 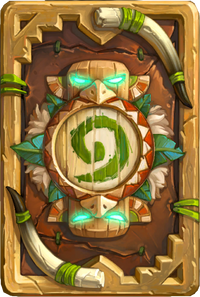 A card back themed after Thunder Bluff in Hearthstone.