From Wowpedia
(Redirected from Thunder Lizards)
Jump to: navigation, search

Thunder lizards are large, heavy-set dinosaurs that are implied to be distant relatives of the kodo. They are aggressive beasts that prefer canyons, plains, jungles and forests. When in combat, they are capable of shooting lightning from their mouth at distance and dole out harsh headbutts at close range. Thunder lizards come in a wide variety of colors, including black, blue, gray, pink, and red. They can be found in the Barrens, Desolace, Durotar, Stonetalon Mountains and Vol'dun.

It is said that some rare kodos are bound to the spirits of the sky and storm. Thus, the tauren have legends about those they call lightning lizards, thunder lizards and storm walkers. Whether or not these behemoths actually have supernatural powers remains to be seen.[1]

Vol'dun was once a lush jungle and the home of many great and powerful thunder lizards. Now their bones rest around the Temple of Akunda.[2]

Eastern Kingdoms thunder lizards appeared in the missions The Culling and A Dark Covenant.

Attacks which interrupt the spellcasting of NPCs such as the rogue's

[Earth Shock], and the warrior's

[Shield Bash] are also effective against these lizards. When you see the lightning building up in its mouth, hit it with the counter to casting used by your class and you won't have to worry about getting hit by any lightning bolts... you'll only have to worry about being trampled, gored, or crushed by a huge and irate reptile.

Thunder Lizards are hostile, whereas kodos are neutral, and will not aggro unless attacked. 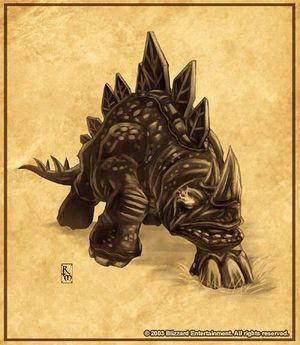 Thunder lizards are tamable by hunters as part of the Scalehide family, along with ankylodons, mushan, kodos and stegodons.