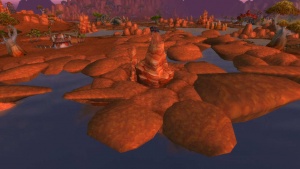 Thunder Ridge after the Cataclysm.

Thunder Ridge is an area located in the land of Durotar, just southwest of Orgrimmar. Previously home to many herds of thunder lizards, this breathtaking gorge was flooded by the Southfury River during the Cataclysm.

“Named after the massive thunder lizards that make their home here, this land is an ecological wonder. Filled with many diverse families of creatures, it can be studied for ages and still hold surprises for those who have traversed its protective valleys.”

Shortly after the founding of Durotar, Rexxar and his companions journeyed to Thunder Ridge to obtain shimmerweed for Drek'Thar, Thrall's farseer. Rexxar noticed a change in the lizard's behavior, and informed Drek'Thar upon his return to Orgrimmar. Drek'Thar and Rexxar later discovered a human lumber operation that was deforesting the ridge and driving the lizards mad. They were forced to put down the lizards to prevent disaster.

Thunder Ridge's dense forest was razed which prompted its thunder lizards to move to Drygulch Ravine.[1] Jaina Proudmoore, told by Thrall, went to investigate and discovered that the trees were cut by magic. 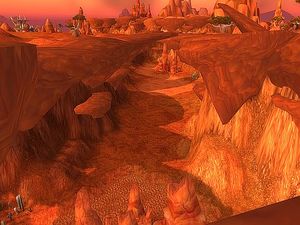 Thunder Ridge before the Cataclysm.

A small sect of Burning Blade led by Fizzle Darkclaw resided within the region and spread chaos in their wake.[2] Orgnil Soulscar ordered Horde agents to kill Fizzle and claim his claw as proof. Meanwhile Uzzek instructed Horde warriors of thinning the local thunder lizard population in order to prove their strength.[3]

In the wake of the Cataclysm Thunder Ridge became flooded, killing the thunder lizards and the Burning Blade within the valley. Horde agents were sent into the ridge in order to obtain

[Fizzle's Orb] from his corpse and remove the corpses of the thunder lizards in order to make the new water source drinkable.[4][5]

Within the flooded ridge are golden stonefish This fish can't be caught by normal means due to its jaws that snap through any lures and hooks. Besides, their scale prevents them from any damage but massive electrical discharge nearby that can be caused by

Thunder Ridge is a breathtaking gorge which until recently was untamed by any civilization. Thunder lizards give this place its name, and it dominates the landscape for some distance. Tallstriders also hang out on the fringes with an an eye out for an easy lunch.[7] Being the home to behemoth lightning lizards, it helps obscure the presence of the Burning Blade there, led by the goblin warlock Fizzle Darkstorm.[8]