Thunderaan the Windlord is the Elemental Lord of air and master of Skywall. Formerly known as the Prince of Air, Thunderaan became the new Windlord following the death of Al'Akir during the Cataclysm. 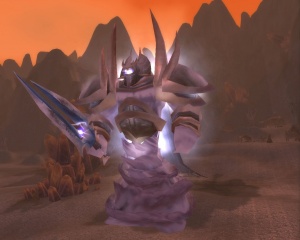 During the Elemental Sundering, the Firelord Ragnaros sought to consume Thunderaan. Thunderaan was betrayed by Ragnaros's lieutenants, Baron Geddon and Garr, and struck down by Sulfuras, the legendary hammer of Ragnaros. Thunderaan fell, utterly defeated. The Firelord feasted upon the essence of the Prince of Air but was unable to consume him entirely. What little remained of Thunderaan's essence was stored within a talisman of elemental binding. Ragnaros then shattered the talisman in two flawless pieces and assigned it to his two lieutenants.

When mortal adventurers infiltrated the Molten Core beneath Blackrock Mountain thousands of years later, they struck down Garr and Baron Geddon and reclaimed the Bindings of Thunderaan. Working with Highlord Demitrian of the Twilight's Hammer, they were able to successfully summon Thunderaan... only to strike him down and for the dwarven warrior Wray to claim his sword, Thunderfury, for himself.[2]

Years later, the Earthen Ring sought to gather the four Elemental Lords to stand against the Burning Legion and so decided to resurrect Thunderaan to replace the fallen Al'Akir. A shaman adventurer gathered Thunderfury from Wray, who had been killed in Azsuna, and brought the blade to the Vortex Pinnacle.[3] Without a Windlord, Skywall had been in turmoil and so after arriving there the shaman empowered Thunderfury with the Heart of Skywall taken from Vortos, Duke of the East Winds. With the heart, Thunderaan was reborn from Thunderfury and became the new Windlord.[4] Thunderaan promised that the armies of Skywall would stand shoulder to shoulder with the mortal races against the Legion,[5] and sent Consular Celestos to join the Earthen Ring at the Heart of Azeroth.[6]

Soon after, a rogue obtained a pair of bindings similar to those Ragnaros had once used to contain Thunderaan and sought to use them as leverage to bargain with the new Windlord.[7] Thunderaan was not pleased, as the last time mortals held such bindings they had freed him only to strike him down and steal his weapon. Even so, he agreed to bless the rogue's weapons with his power in exchange for the bindings, intending to use them against the minions of the new Firelord. As he departed, Thunderaan warned the rogue never to call on him again.[8] 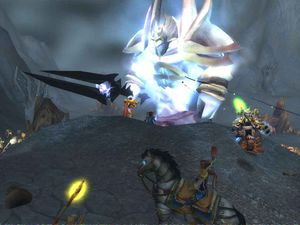 An epic battle against the newborn Thunderaan.

Thunderaan has surprisingly little HP, so downing him should not be a problem for any 40-man raid with experience in the Molten Core or harder instances. Bring some friends to put the numbers over 40, and you're virtually guaranteed success. He can be killed with far fewer people if they're well-geared or patient - 7 or 8 have been confirmed, and a good 5-person group should be able to complete the fight given time.

Thunderaan has a knockback that wipes aggro, but the radius for the knockback is less than the radius at which he's attackable. So long as the tank stays at maximum melee range the knockback should not be an issue. There is also a chain lightning effect that can hit melee attackers, and an area effect lightning attack that most ranged attackers and healers can avoid by keeping their distance.

A tank with high nature resistance will mitigate a great deal of Thunderaan's damage.

Prince Thunderaan yells: My power is discombobulatingly devastating! It is ludicrous that these mortals even attempt to enter my realm!

Speech to the Conclave of Wind

I see the Farseer has edified your allegiance to my direction. Good. Let me clear away any lingering doubts still polluting your minds. I am the Windlord now, and all of you bluster about within my domain. But let us not leave this council with a whiff of foul air. Divided, we are scattered to winds. But united, we are a cyclone of power. Let this council never dissipate again.

Prince Sarsarun might be Thunderaan's brother and Al'Akir his father given his title of a prince.