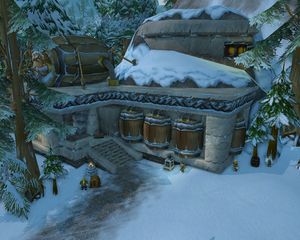 The Thunderbrew Distillery is a dwarven tavern in Kharanos. It features trainers for warriors, priests, paladins, mages, rogues, cooking, and first aid. It also has several vendors, along with Innkeeper Belm with the usual services. The distillery is known far and wide for its excellent ale.

Grimbooze Thunderbrew used to be the original owner of the distillery.[1]

During one of the earthquakes preceding the Shattering, the Distillery was damaged and High Priest Rohan, Anduin Wrynn, and Aerin worked hard to help the injured and free the trapped. After clearing out the first floor an aftershock hit Kharanos, causing the remains of building to fall into a sinkhole.[2] Aerin, Anduin's friend and protector, was in the building when it fell into the earth and died with the others that were still inside. Rohan acknowledged that the Distillery will be rebuilt.[3]

After the Shattering, the building is shown to be whole again.