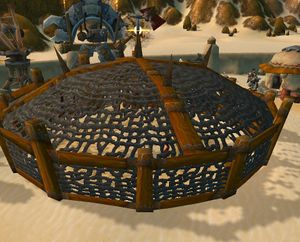 The Thunderdrome is the large cage arena in the center of Gadgetzan. It has one door on the north side. Fights are staged here for the entertainment of the populace - the bloodier the better! Interested parties should speak to the fight promoter Dr. Dealwell if they wish to participate. Katrina Turner is also involved in the management of the arena.

It was closed down for a long time because of a series of injury lawsuits, racketeering charges, and copyright infringements.[1]