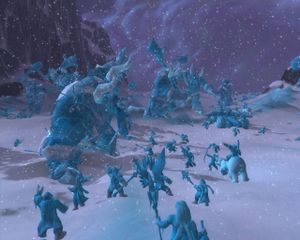 Thunderfall is located just to the north of Frostfield Lake in the eastern reaches of Storm Peaks. The area is involved with the questline that starts with

[80] In Memoriam. In it is a scene of frozen ice giants and frost dwarves. Not only are the icy corpses frozen in place, it's as if they are frozen in time as well, as many of the dwarves died while in mid-air and have remained so to this day. The spectacle was created when Thorim, in a fit of rage, tossed Krolmir, Hammer of Storms.

"King Jokkum says: As the great explosion filled the region, my father cast a rune at the great hammer that it might not be had by our enemies. It was his final act..."

Discovering Thunderfall will light up the southeast portion of the map covering Frostfield and Fjorn's Anvil.

While one might assume that the combatants are in suspended animation, the questline and the presence of their wandering spirits clearly reveals that they are in fact dead.