Not to be confused with Arthura.

Thura is an orc and the niece of Broxigar. Thura's father and Brox were half brothers, having the same mother but different fathers.[1]

Thura was only a child during the Third War, but when Brox returned as the only survivor from helping to hold a vital mountain pass against hordes of demons, even she could sense his survivor's guilt. When she came of warrior age and proved her skills, Thrall himself gave her the Axe of Cenarius, the enchanted wooden axe her uncle wielded in the War of the Ancients, which had been left with Thrall by Krasus. Brox's only other living relative that could have been given the axe was her other uncle, Varok Saurfang, as her cousin Dranosh Saurfang had recently died (again) in Icecrown Citadel. One of the Saurfangs might have been given the axe before her, but Thrall's most trusted shaman had seen in a dream that it should go to Thura. No one knew why the dream had occurred, but Thrall had listened, and Thura felt honored to wield such a fabled weapon.[2]

Thura had been given false dreams about Broxigar's death, in which Malfurion Stormrage killed him. She believed that they were showing her the truth, and thus declaring a blood oath, she decided to avenge her uncle and kill Malfurion. The she entered the night elven forest, where she found and started following two night elves and a human.

She had reached the Emerald Nightmare thanks to Lucan Foxblood, who she "convinced" to take her there. After parting with him, she had eventually found the tree into which Malfurion was transformed and after struggling with Tyrande Whisperwind was able to cut him with her axe, freeing him by doing so. It was later revealed that it was Malfurion himself who showed her those dreams, doing so to make her go after him and free him from his entrapment in the Emerald Nightmare. He did not like deceiving her, but the Axe of Cenarius was the only thing that could save him.[3] It was then she realized that she was tricked into doing so, and, after the capture of Ysera and the awakening of Malfurion, she was teleported out of the Nightmare together with Tyrande, Lucan and Broll. They got attacked by Gnarl and fall into nightmares, where she was dreaming about Thrall as he is executing her for her failures. Then Lucan teleported all of them into Emerald Dream and from there into Stormwind, where the group met Varian, who when he saw her wanted to attack her, though Varian was calmed by Broll. Then she accompanied the group into an inn where night elven ambassador lived and who has a hearthstone connected to Darnassus. Broll teleported there and Thura with Lucan helped Tyrande to calm the ambassador. Lucan teleported out of there, though the trio materialized in the Nightmare. There, the trio became prisoners of Emeriss and Lethon who wanted her axe. Thanks to Tyrande, Lucan was able to teleport her, though the axe and Tyrande remained within the Nightmare. 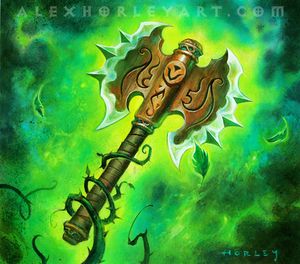 The Axe of Cenarius, inherited by Thura.

Her axe was the only thing that could hurt the Nightmare Lord, who was actually Xavius, so he desperately wanted to deprive her of it. He managed to do so, but she got it back later with Broll's help, and when Malfurion was striking the final blow to Xavius, she helped him by chopping into the shadow tree in the Emerald Dream, while he was attacking it on the Azeroth. With three mighty swings on the critical spot Malfurion showed her, she killed Xavius's shadow tree and he died quickly after that.

After the Emerald Nightmare was contained in the Rift of Aln, Malfurion delivered her back to her people, letting Thrall, his old compatriot, know of her significance in their struggle. At her request, she was the bearer of a message of well wishes from him to Tyrande's and Malfurion's wedding.

While Thura is clearly listed as niece of Broxigar, and Varok Saurfang there is no listing of her parents. Richard Knaak confirmed in a interview with WoW Insider that the information about her parents was deliberately omitted in Stormrage.

"Speaking of Thura -- she's Broxigar's niece. Who's her father?

Knaak: That's something that we haven't fully -- we can't answer that right now. That was decided.

Was that deliberately omitted? 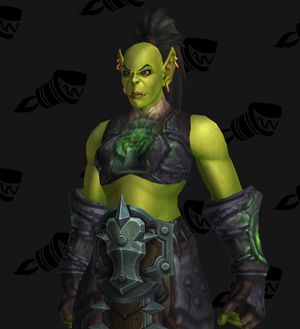