“It is his nature to assume the worst.”

Tichondrius is the leader of the nathrezim of the Burning Legion, under the command of Kil'jaeden and Archimonde. A powerful and cunning Dreadlord, Tichondrius served as an envoy of the Legion's will to Arthas Menethil as the Scourge prepared to summon the Legion to Azeroth. Tichondrius, along with the other Dreadlords, commanded the Scourge during the invasion of Kalimdor. Tichondrius later met his end in battle against the empowered Demon hunter Illidan Stormrage.

He was a major character in the Warcraft III campaigns Path of the Damned, The Invasion of Kalimdor, and Eternity's End. While he appeared often, he was never available for the user to control.

Tichondrius returns in World of Warcraft: Legion, emerging from the Twisting Nether once more to help lead the Burning Legion's third invasion of Azeroth.

At Kil'jaeden's command a group of dreadlords consisting of Tichondrius, Mal'Ganis, Balnazzar, Detheroc, and Varimathras tortured the orc shaman Ner'zhul after he had escaped from Draenor to the Twisting Nether. Eventually, Ner'zhul, his sanity cracking, would agree to serve Kil'jaeden. Kil'jaeden passed the orc's spirit through death and revived as a spectral entity. The dreadlords bound his disembodied spirit to a specifically crafted set of armor and a mighty runeblade called Frostmourne. These items were locked in a diamond-hard block of ice to imprison Ner'zhul.[6] The Lich King and the dreadlords who had tortured him were then sent to Azeroth in order to weaken any resistance that the Burning Legion would in face during the Third War. While the Lich King gathered his strength, Tichondrius and his fellow dreadlords would serve as jailors and executors meant to hasten the Lich King's task by any means necessary. To this end, they would construct the Icecrown Citadel within Northrend. Though seemingly broken by the dreadlords, Ner'zhul sought vengeance and was able to play on the dreadlord's fears of Kil'jaeden in order trick them into allowing him to hurl Frostmourne out of the Frozen Throne.[7]

The Scourge of Lordaeron

As befitting his status as the greatest of the Nathrezim, Tichondrius was placed in charge of a number of Scourge operations. Following the corruption of Prince Arthas Menethil, Tichondrius introduced himself to the Death Knight, providing him with orders from Ner'zhul, especially concerning the resurrection of Kel'Thuzad. Because he didn't entirely trust Arthas, Tichondrius pretended to be another one of the Lich King's followers. The ghost of Kel'Thuzad, however, informed Arthas that Tichondrius and the other dreadlords were actually the Lich King's jailers. He took particular amusement in sending Arthas to acquire the Urn of King Terenas, a task which would involve killing Arthas's former mentor Uther the Lightbringer.[8] 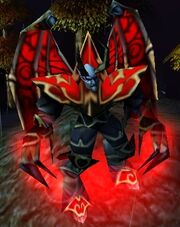 Tichondrius regularly discussed the Scourge's progress with his colleagues, Anetheron and Mephistroth, who remained on a Legion planet in the Nether. The Darkener expressed (justified) concern that Ner'zhul had alternative plans for his new "champion", but Mephistroth pointed out that he "wouldn't dare undermine our efforts now."

The dreadlord continued his work, eventually overseeing the death of Uther Lightbringer, the invasion and destruction of Quel'Thalas, and the siege of Dalaran. During the siege of Dalaran, Tichondrius accompanied Arthas and Kel'Thuzad throughout the city and eventually took the Skull of Gul'dan while Kel'Thuzad and Arthas stole the Book of Medivh.[9] Once Archimonde was summoned, he decreed that the Lich King was no longer needed, and gave Tichondrius control of the Scourge.

The humans, having lost their most powerful leaders and heroes, quickly fell before the might of the Legion, now joined by Mannoroth. Mannoroth was still sore over the orcs' failure to conquer Azeroth years before, and was angrier still when Tichondrius smugly observed that the Scourge had done the job the orcs couldn't. Mannoroth became even more enraged when Tichondrius informed him that the orcs had left the continent. The pit lord was eager to take his frustrations out on the orcs, so at the first opportunity he and Tichondrius picked up the trail and followed the orcs to the ancient land of Kalimdor.

The arrival at Kalimdor reminded the pair of demon lords only too well that the threat of the night elves still remained, as well as the demigod, Cenarius. Mannoroth suspected that unless weakened, they would still pose a considerable threat. Tichondrius, however, came up with a solution. He knew that the orcs had earned the wrath of Cenarius, and he believed that corrupting the orcs once again would give them the power to defeat Cenarius, leaving him defeated when the Legion began their invasion of Kalimdor in full. Encouraged by the Darkener's plot, Mannoroth spilled his burning blood into a sacred pool that was eventually sensed by the Warsong Clan, who would eventually drink the blood in order to kill Cenarius. Following the death of Cenarius Mannoroth would personally recruit the Warsong back into the Legion's fold, while at an unknown point either during or after these events Tichondrius would return to Archimonde's side.

Tichondrius led the Scourge to Moonglade in an attempt to destroy the barrow den holding the body of Malfurion Stormrage. While the ghouls were cutting down the trees near the building, Tyrande awakened Malfurion.[10]

In spite of Mannoroth's death at the hands of Grommash Hellscream, Tichondrius proceeded with the invasion. The Scourge, more dangerous than ever thanks to the demonic support of felhounds, doomguard and infernals, was more than successful in penetrating Ashenvale without Cenarius's intervention. The combined forces of the orcs and the humans, coupled with the resistance of the night elves, eventually managed to halt their progress.

As the invasion of Kalimdor progressed, Tichondrius began corrupting the forests of Felwood using a powerful warlock artifact, the Skull of Gul'dan, which also augmented his own powers. However, the skull was consumed by Illidan Stormrage, who had been tipped off by none other than Arthas. Transformed by the skull into a demon-hybrid, Illidan used his newfound power to defeat Tichondrius.

After his death, the Legion forces in the area took his claw and Anetheron, whom he called brother, participated in the Battle of Mount Hyjal likely in his stead.

Tichondrius reformed within the Twisting Nether and is one of the many demons summoned by Gul'dan during the battle of the Broken Shore.[11]

Tichondrius now watches over Gul'dan in the name of the Burning Legion, to ensure he does not fail his masters.[12] He serves as a boss in the Nighthold, where he voices contempt that the Nightborne were unable to stop their own palace from invasion. He would ultimately be defeated himself, his dying words expressing his disbelief.[13] 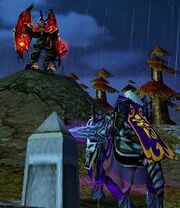 Tichondrius introduces himself to Arthas.

The meeting in the Twisting Nether.

Lord Jaraxxus yells: We return.
Brutallus yells: To conquer this puny world.
Tichondrius the Darkener yells: And burn it to a husk.