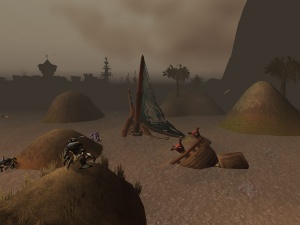 Tidefury Cove in World of Warcraft.

Tidefury Cove is located at the end of Dustwallow Bay, south of Theramore Isle and off the coast of the Wyrmbog in the contested territory of Dustwallow Marsh. It is dotted with small islands and reefs, and is a perilous place to steer one's ships. Two ships are currently found broken upon the shallows here, now riddled with roaming makrura. The famous fisherman Nat Pagle also makes his home on Nat's Landing, one of the cove's many islets.

“With the combined forces of the ogres, tauren, and Thrall's Horde now working together, attention has turned to the human foothold at Tidefury Cove. Admiral Proudmoore's forces are deeply entrenched, and only a full assault can push them from the shore. As first light shines upon the orc encampment, the Horde prepares for battle.”

Toward the end of the Invasion of Durotar, with the combined forces of the ogres, tauren, and Thrall's orcs now working together, the attention of the Horde turned to the human foothold at Tidefury Cove. Admiral Proudmoore's forces were deeply entrenched, and they had erected a massive castle on the shore.

The orcish base contained an Horde Merchant, a Discount Trinket Shop, several Orgrimmar Watch Towers, an Orgrimmar Fortress and many military buildings. The Kul Tiran base was staffed by elite footmen, riflemen, knights and others. The base contained a unique castle, made out of an oversized central building with four Castle Guard Towers. It was the Horde's objective.

Off the coast was an island containing Wizbang's Island Treasure Shop.

In the Founding of Durotar chapter Old Hatreds, Admiral Proudmoore's castle is said to be located on Tidefury Cove, threatening Orgrimmar and Durotar with a full-scale ground assault. However, in World of Warcraft Tidefury Cove is located a vast and winding distance from Durotar. Furthermore, Thrall procedes to march the Horde to Dustwallow after destroying Proudmoore's base. Tiragarde Keep is a ruined base both in Durotar and directly south of Orgrimmar, so it is possible that this has been retconed or just an oversight, and that Tiragarde was Proudmoore's main fortress, with the name "Tidefury Cove" simply being reused somewhere else. It could probably be Northwatch Hold as Cycle of Hatred says the orcs fought Daelin there.[1]

Tidefury Cove is possibly the location of Proudmoore's island defenses around Theramore Isle in Seas of Blood, though they are little more than sandbanks in World of Warcraft.