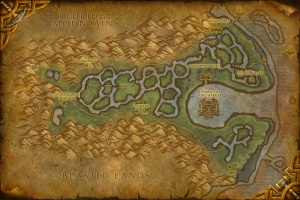 We have suffered many losses, <name>. Dreadmaul Hold has sent ogres from the Blasted Lands as reinforcements, but they can only send so many; the Alliance attacks them as well, even as we speak.

The Alliance has countered our ogres with mounted knights, a strategy that served them well in the Second War. We will need our strongest warriors to turn the tide of battle!

Return to the Bloodmire, <name>, and bring down those knights!

The ogres are powerful, but without help they will fall to the Alliance riders.

You are a true champion, <name>, to take the lives of so many on the battlefield. I hope it will be enough to save Stonard.

[54] Marking the Fallen before heading out. The battle has advanced phases. The corpses of footmen and warriors litter the ground, and the summoners and heavily-armored units of both sides are in play.