The Tidesages (also written tidesages), also known as sea priests or tidepriests,[1][2] are a religious Kul Tiran group that worship the Tidemother based in Stormsong Valley, in the Shrine of the Storm. Most people on Kul Tiras look to the seas for guidance the same way others look to the Light, but the tidesages have a much deeper connection with the water.[3]

The tidesages were led by Lord Stormsong and had a leading council beneath him, each overseeing a different aspect of the order's work. Recently, however, Lord Stormsong, his inner circle and most of his followers have turned to the Void. Fed up with feeding the entire kingdom and building and blessing its ships for nothing in return, they stole the Kul Tiran fleet and set out to build many more ships to conquer Kul Tiras. Their alliance with Queen Azshara was eventually shattered as the Storm's Wake, a faction of Stormsong inhabitants opposing their schemes, assaulted the Shrine of the Storm and killed Lord Stormsong.

2,700 years ago, a group of humans from Gilneas left their homes and took to the ocean.[4] They scanned the horizon day and night for a new home, seeking a place that married land and sea to shelter their children from the ocean waves. The ancestor of House Stormsong was the first to hear the whispers of the Tidemother, gentle and imperceptible to all but him, which taught him the power of the seas. Stormsong's powers guided fish and fresh water to the sailors, now masters of the elements, and as Stormsong's powers grew others began to hear the Tidemother. The wind was theirs to command as it powered their sails, and the hulls of their ships became impenetrable to the denizens of the ocean deeps. The sea guided the sailors to a new home, an island that they would call Kul Tiras, and they sent their tidesages to guide others to come to the island as well.[5]

In recent days, the Tidesages have withdrawn into their cloisters and seem uninterested in finding the ships of the Kul Tiran fleet that have been missing for months.[6] Long had they listened to the sea to guide their ships and their people, gentle whispers imperceptible to most. But in recent times the voices changed, becoming demanding and even violent.[7] They started manipulating the Void,[8][9] and while many turned hostile and started worshiping the horrors of the ocean, others remained firm in their duties to Kul Tiras. Their aid and mystical oceanic magic is requested in order to locate the missing fleet of legend.[10]

The tidesages stationed at Stormsong Monastery betrayed their people and their teachings. The place was raided by a Horde adventurer, defeating the tidesages.[11][12]

Lord Stormsong is revealed to have become a follower of Queen Azshara, and planned to conduct a ritual that would give her the entire Kul Tiran fleet which the tidesages held hostage. Many tidesages have become k'thir.

After Lord Stormsong's defeat, the missing fleet was found, but it could not be called home without the aid of a Proudmoore.[13] Jaina Proudmoore would later save them.[14] 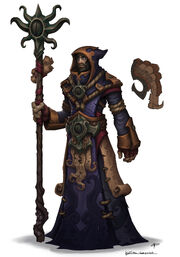 Concept art of a Tidesage.

All tidesages walk the ceremonial Path of Storms on their way to be blessed at the Shrine.[15] Sagehold is where the tidesages study and learn to master command of the sea.[16] The tidesage order also possesses a sizable monastery in Boralus, where visitors are only allowed by boat.[3] They have magical dominion over the oceans, can control water, storms, wind,[17] and have mastery over all the elements.[8] They use wands to control their water elemental constructs.[18] They can also free an elemental from its bindings.[19] Their aquatic magic also involves runes.[20] They can use ritual implements to augment their power: a

[Abyssal Beacon] allowing them to reach what the ocean's mists hide, and a Wavecaller's Mantle which carries incantations on its scrolls.[21] They can also summon sirens.[22]

The tidesage takes several oaths as part of their role: to serve[23] and protect the people, guide and sustain them, and to make their ships strong.[24] There also appears to be one to not attack or go against their fellow sages.[25]

Tidesages bless every last Kul Tiran ship, which is what really sets them apart from the vessels visiting Kul Tiras. Kul Tiras's largest ships always carry a tidesage to navigate through storms, withstand heavy seas, and put wind in their sails. They help bring fish to nets in Tiragarde Sound and rains to the fields in Stormsong Valley.[3] They also bless fishermen and their equipment, read the tides for omens, and pray for the return of sailors.[26] A tidesage's day-to-day job involves, among other things, blessing the ships, reading the waters, and finding the best spots to fish.[27]

The people of Stormsong do not bury their dead, they send them to the sea. The tidesages can use a bell that calls the souls of the recently deceased to them, and release them through the Ritual of Release.[28] The souls of the fallen are released into rivers that flow through the Shrine of the Storm and out into the open sea. Legends say that as their spirits pass through the Shrine, they aid in the great blessing rituals that all Kul Tiran ships undergo. In that way, the Stormsong never stop serving their people.[29]

Tidesages use seaweed and seal blubber to create tonics for illnesses.[27] They can bless seawater into

[Imbued Tidewater], which rejuvenates strength and mends wounds.[30] Because storm silver is lightweight and resists corrosion, Kul Tirans use it in their ships.[31] Once this sacred material is blessed by a sea priest for use in shipbuilding, it is buried under water for a year.[32]

The Dapple Gray is the favored mount of the sea priests.[33]

The tidesages worship a being known as the Tidemother.[34] The magical wards Tidemother's Pride, Tidemother's Radiance, and Tidemother's Wrath that guard the Shrine of the Storm were said to be gifts from the sea itself. They long protected Kul Tiran flagships against even the fiercest storms, but since the Tidesages settled in Stormsong Valley they have instead kept the Shrine safe. Lord Stormsong later turned their power against outsiders.[35]

When a tidesage blesses a ship, they recite the following:[36]

Storm above and tides below, hear us now!
Breathe strength into our sails, and guard us against the crushing depths!
Let this vessel be one with the vast ocean, and us with her.
Sea to sea, storm to storm, tide to tide.

Though most tidesages are robe-wearing casters, there are also some of them wearing heavy armor. Among them are the Shrine Templar, paladin-like melee fighters, and the Ironhull Apprentices following the way of the Hull (see below). In addition to these armored warriors are tideguards.