Tideskorn Harbor is a vrykul harbor town found near the Helmouth Shallows in Stormheim. Formerly home to the Tideskorn clan, they earned their name the day the mists took their greatest harbor. Since then, no vrykul loyal to Odyn has willingly entered that cursed place.[1]

The final quest in this area requires players to complete the Maw of Souls, and destroy Helya's ship, the Naglfar.

At some point before the Burning Legion's third invasion, scorned by the tides that the kvaldir arrived on, Helya's mists surrounded Tideskorn Harbor, maddening its citizens and making them violent and savage. This made work in the harbor much more difficult as the fleets' crew preferred to brawl instead of working. As time passed, seagulls begin to fall dead from the skies, entire schools of fish died with the floating bodies rotting in the shoals, and the fishermen didn't have a good catch. If this wasn't enough, the town's entire stock of food spoiled after the first day of the mists engulfing the town, and people begin to disappear, the air growing stale and the stench of dead fish everywhere. Day by day more people couldn't think clearly and many had ventured into the mists never to be seen again, including the town's leader, Jarl Tarben. In the end, the entire population of Tideskorn Harbor was taken by the mists, siphoned of life and converted into Helya's own.[2] Since then, the harbor belongs to the Helarjar, and the jarls of Stormheim were forced to give up the sea.[3] It was custom for deceased jarls to be sent out into the sea in a longboat and set the boat ablaze, but after the mists came, the vrykul dare not to as the body may return as a kvaldir.[4]

With the help of an adventurer, Havi managed to find a lead, Helya's ship, the Naglfar.[5] The adventurer was tasked to go aboard the ship and destroy it. After this, the Tideskorn souls were freed to be judged.[6]

The Bladewind Raiders, a group of Helarjar kvaldir that serve Vigfus Bladewind, attacked Tideskorn Harbor. They were defeated by the mortal champion of the Valarjar sent by Odyn to kill Helya's personal champion who had stolen Odyn's warswords. While Vigfus was defeated, survivors are said to have retreated back into Helheim.[7] 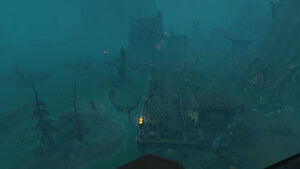