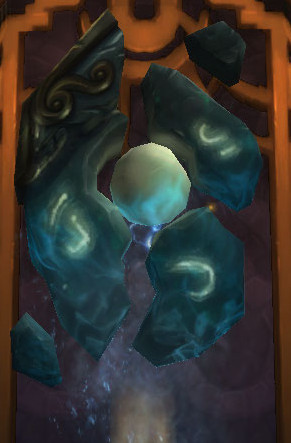 The Tidestone of Golganneth is one of the titan Pillars of Creation. It was used during the ordering of Azeroth by the titan-forged Keepers to create the rivers and seas of Azeroth.[1] During the third invasion of the Burning Legion, the Tidestone was found in Azsuna.[2]

After the Highborne found the Pillars while hunting artifacts throughout Ancient Kalimdor, they guarded them in the Vault of Antiquities in Suramar. During the War of the Ancients, Grand Magistrix Elisande and her allies in Suramar, opposing Queen Azshara, used the Pillars to stop the Burning Legion from creating another portal in the Temple of Elune.[4] After their success, the Tidestone of Golganneth was moved for an unknown reason to the Hall of Antiquities in the academy of Nar'thalas.

When Prince Farondis turned against Queen Azshara, he tried to use the Tidestone to destroy the Well of Eternity in Zin-Azshari. Doing so would close the Legion's portal and stop the invasion. Unfortunately, there was a loyal noble to Azshara in his court that gave word to her. In a frightening display of arcane power Azshara remotely destroyed the Tidestone, releasing a wave of dark energy over all of Azsuna[5] that shattered the region and cursed its citizens to live on as ghosts.

Ten millennia later during the third invasion of the Burning Legion, the Tidestone was stolen by Tidemistress Athissa and Warlord Parjesh so that Queen Azshara herself could restore it for her own purposes.[6] While covered by Athissa, Parjesh took it to the Eye of Azshara so that the Tidestone (resorted by Athissa) could be used to summon the Wrath of Azshara.[7] It floated above the creature, and fell down when the Wrath was defeated. It was then retrieved and stored in the Portrait Room of the Chamber of the Guardian within Dalaran.[8]

Azshara later dispatched Mistress Sassz'ine and Harjatan to the Tomb of Sargeras in another attempt to claim the Tidestone after they were moved there to close the Legion portal.[9] Once they were killed, the Tidestone was activated in the Abyssal Throne beneath the Tomb to seal the portal and the Tomb.

After the fall of the Legion, the Tidestone was kept in the Tomb of Sargeras, maintaining the seal.[10] 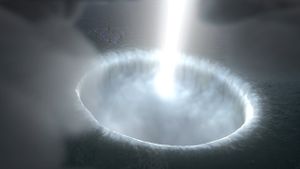 At some point, Azshara's forces stole the unguarded Tidestone of Golganneth. It was used in the Blood War to open a gigantic rift within the ocean and around Nazjatar, trapping the forces of the Alliance and Horde in Queen Azshara's domain. The power of the Tidestone also kept a vengeful Neptulon at bay, just as it did the sea.[11] The Tidestone was kept at the Tidal Conflux, in front of the Gate of the Queen. The Alliance and Horde used one of the Javelins of Suramar to destroy the ward around the Tidestone. Afterward, Jaina Proudmoore and First Arcanist Thalyssra used the stone's power to open the path to the Eternal Palace.[12]

[100 - 110] Children of Nar'thalas only says that Azshara "released a wave of dark energy over all of Azsuna and its inhabitants" causing the citizens of Nar'thalas to live on as ghosts, the Tidestone's destruction seems to have also caused a massive ley-line explosion that radiated outward from the stone's location under Nar'thalas Academy, as well as a massive inland tsunami some time before the Great Sundering made the area near the ocean at all (indeed, the El'dranil Shallows seem to be at least in part a watery blast crater). Drowned Students and Drowned Instructors haunt the ruins, seemingly killed by drowning and not the dark energies directly. The damage to the Ley-Ruins of Zarkhenar also lines up with the sundered ley-line at the stone's location, though with undamaged land in between.