In Mists of Pandaria there is a random chance to see pieces of these sets put up on the Black Market Auction House by NPCs, for the opening bid of 10,000

. Thus, characters of a race and/or class combination that did not exist in the original game have a chance to collect these pieces for transmogrification, such as Alliance shaman, Horde paladins, troll druids in Cataclysm and gnome hunters in Legion. 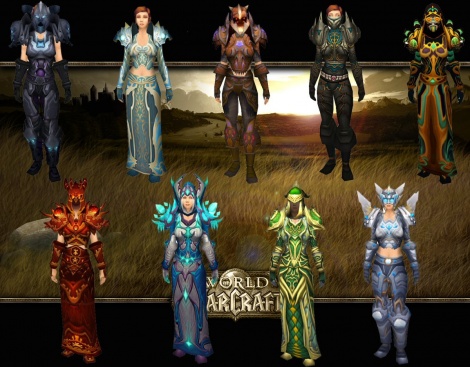 The items that form these sets are quest rewards. The quests require, among other things, token drops from bosses in Naxxramas. The only exception are the rings, which drop directly from Kel'Thuzad in Naxxramas.

The tokens for the following items were found on the first two bosses of a specific wing in Naxxramas as well as on Gluth:

The tokens for the following items could be found on the endboss of a specific wing in Naxxramas: