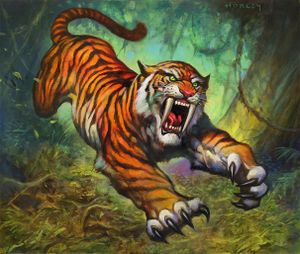 A tiger in the TCG.

“When waking a tiger, use a long stick. Better yet, tell your friend to wake the tiger instead.”

Tigers are a type of large, predatory cats with striped fur native to both Azeroth and Draenor. Azerothian tigers are mainly found in Stranglethorn Vale, Pandaria, on the Wandering Isle and in Uldum, while Draenic tigers are mostly found in Talador and the Spires of Arak. Tigers were once also found on the Echo Isles of Durotar, however, they have all but vanished from there.

The last known Zulian tigers were kept by High Priest Thekal, deep within Zul'Gurub. They are said to have been hunted into extinction.[2]

Like their distant nightsaber cousins, tigers are renowned for their razor-sharp claws, incredible agility, and love of being scratched behind the ears.[3]

Considered to be lucky, tigers carved of jade are prized, but taming a jade tiger itself is an even greater prize.[4] A rarely seen family of tigers, many believe (perhaps incorrectly) that some residual magic or other event is responsible for the unique color of the zipao tiger.[5]

Historians claim that spectral tigers were created when Draenor exploded, unleashing energies that warped the world's flora and fauna.[6]

The blood from the prowler tigers in Talador is sometimes added into elixirs as a coagulant[7] and can be used in combination with snapdragon fronds and a riverhopper eye to create a resurrection potion.[8] Tiger blood can also be used as a pigment.[9] Daggle Bombstrider asks adventurers to gather tiger blood for her, intending to sell it on the black market after spreading a rumor about how it improves muscle[10] or adds potency to warlock summoning spells.[11] Far Seer Mok'thardin asks adventurers to gather a pristine tigress fang for him to use in a powerful enchantment.[12] Linzi Hewstrike claims that people often request heavy leather or rough hides from her, but thinks that they would also appreciate if she had softer material such as tiger or panther fur.[13] The Darkspear trolls use the hides of Durotar tigers to create blankets, armor, and tents.[14] 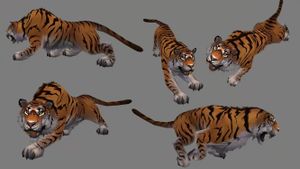 These great cats stand more than 3 feet tall at the shoulder and are about 9 feet long. Tigers typically weigh from 400 to 600 pounds.[15]