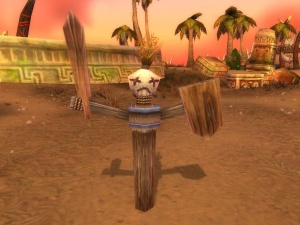 A Tiki Target after it has been 'defeated'.

Tiki Target is a level 1 training dummy mob in the troll starting area intended to allow new players to practice on them via quest. Novice Darkspear Druid and similar NPCs stand round attacking them to simulate the idea of training an army and thus work the newbie quest into the storyline.

It has a short respawn rate.