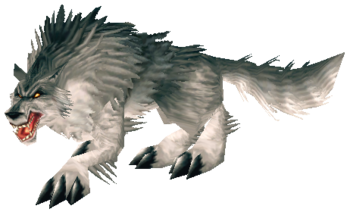 Timber wolves[1] are a species of wolves found in plains and wooded areas in Azeroth and Outland. 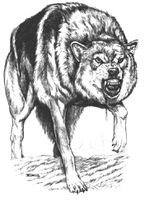 Timber wolf from the RPG.

Common throughout Azeroth, timber wolves are pack hunters excelling in the persistent chase of their prey. While many humans fear timber wolves as servants of darkness and associate them with orcs, night elves embrace the rightful place timber wolves have in the natural order. Timber wolves move and hunt primarily at night. These wolves have a shaggy pelt of brownish-grey. Timber wolves excel at hunting as a pack. Individuals will harry prey while others circle behind to attack en masse. Packs will send members to assess unfamiliar situations. Timber wolves avoid humans and their settlements, though hunger and harsh winters will drive them to eat livestock.[2]