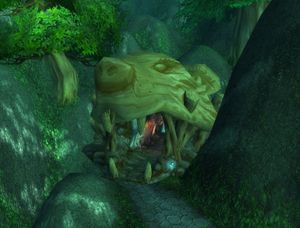 Entrance to Timbermaw Hold as it's seen from Moonglade.

Timbermaw Hold is the capital of the Timbermaw tribe of furbolgs. It is located in north east Felwood and includes the tunnel that connects Felwood with Moonglade and Winterspring.

When the corruption of the Burning Legion crept into the sacred forests of Kalimdor, the furbolgs fell under the corruptive influence of the Burning Legion. However, amidst the chaos and the madness, the Timbermaw tribe escaped the darkness that had fallen on Kalimdor. In the safety of Timbermaw Hold, the furbolgs of the Timbermaw tribe weathered the storm, yet they were forced to watch helplessly as the forest they had loved so much was slowly turned into a twisted, festering perversion of its former self. The corruption had sunk in deep, so that even long after Illidan had consumed the source of the corruption, a powerful warlock artifact called the Skull of Gul'dan, and vanquished the demons' leader Tichondrius, the taint on the woods still remained.

The furbolgs wary of all strangers, fearing that they may mistake them for their corrupted brethren and attack. However, the Timbermaw tribe are painfully aware that they will not last on their own; adventurers who seek out Timbermaw Hold in northern Felwood and prove themselves as friends of the Timbermaw tribe will learn that the furbolgs value their friends above all else. Though they possess no fine jewels or any worldly riches, the Timbermaw's shamanistic tradition is still strong. They know much about the art of crafting armors from animal hides, and they are more than happy to share their healing/resurrection knowledge with friends of their tribe. The Timbermaw's main concerns are putting an end to their corrupted brethren's suffering and finding a cure to heal the wounds the corruption of Felwood has inflicted upon the land, so that one day, the ancient forests will once again resound with the peaceful chants and the soft laughter of the children of the forest.

Centuries ago, Dragons abandoned this place when it was overrun by Satyrs.

This ancient furbolg fortress is located near Felwood's eastern border. It is a vast and rambling place, rumored to run deep into the slopes of Mount Hyjal. No one knows for sure how big it is, since the furbolgs abandoned it in ages past. Undead and satyrs may now wander the shadowed corridors... along with whatever cursed furbolgs still roam the depths. Wise travelers would bypass the site entirely if it were not the only passage through to Winterspring and Hyjal Summit.[2]

Some have speculated that the Hold may become a future instance. Others also speculated that the Timbermaw tribes might have been the new race playable to the Alliance based on their past relationship with the night elves and their pursuit to cleanse their brothers from the corruption which currently affects them. It is unknown what adventurers may find within the walls of Timbermaw Hold if the gates are ever opened. Currently the entrance is filled in with dirt and guarded by Gatekeeper Rageroar, a Timbermaw Shaman furbolg, and two Timbermaw Den Watchers.

The structure could have been formerly made by primitive humans. Nevertheless, based on lore, dwarves are the race that build structures within mountains. According to War of the Ancients: The Sundering, the Earthen joined the night elves in the War of the Ancients, fighting alongside with the Tauren and Furbolgs. Dwarves were revealed to be formerly from the Earthen race, created by the Titan Khaz'Goroth to dig the depths of the earth to rise and shape Mountains. The Timbermaw Hold could be the fortress of the Earthen that assisted the night elves during the War of the Ancients. After the Great Sundering, most Earthen hibernated within the halls of Uldum, Ulduar and Uldaman.